What happens in the span of 7 minutes is the result of a lifetime of choices. This is a bank robber movie that should win tons of editing awards for the amount of times it flashes back. Though imperfect and without accomplishment in some ways, the film uses a clever framework to tell the story of a bank robbery in staggering detail. 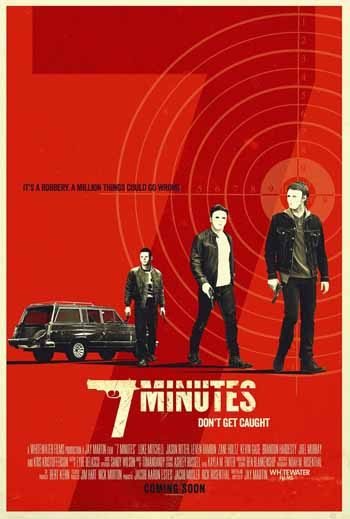 This is a cinematic film produced by the “Starz” network. The immediate claim to fame is Jason Ritter, the late John Ritter’s son. He is part of a group of young men who feel so hopeless in their hometown the only way out they see is armed robbery.

The cool aspect of this movie that really sets it apart from other guns and crime movies is that it flashed back often to explain the origin of the particular event we are watching. We don’t just see 20-somethings robbing a bank, we see their life circumstances that brought them to their criminal mindset. We see behind the drama that caused the robbery. This is masterfully written, acted, and edited.

“7 minutes” has a lot of flaws but I still really enjoyed watching it. It’s as if they tried to accomplish too much of a “wow” with the story. I think a story that focused on just one of the main characters would have been more engaging. It’s been said if you aim at something, you may miss it but you will get closer than if you aim at nothing. The film lacks a clear focus and I was hoping for a standard shoot ’em up that wasn’t so complicated. After all, how much do we as the audience need to be shown to see that robbery is a really bad idea that will likely end us up dead? “7 Minutes” is a great crime movie that entertains despite trying to too much. I recommend it.