My score: 6/10. Finding out someone’s true identity when it doesn’t mesh with the one you know can be a shock. That’s what we learned from this small family in a small town where someone is not who he says he is. Can you blame that character for just wanting peace? 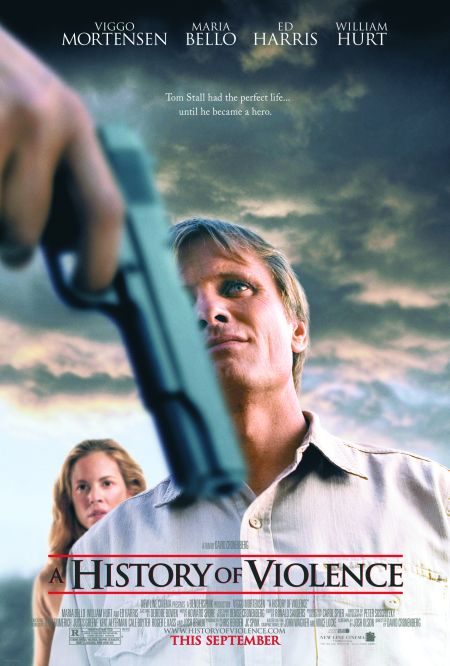 David Cronenberg is the director here and he does a great job establishing the couple and son as a happy innocent family. You wouldn’t expect anything gory as you may usually from him but there are a few scenes later on where he shows his stuff tat way. Still, this is just a drama/thriller that doesn’t include too many special effects or too much latex. We see that Cronenberg can tell a story that makes the audience churn.

Viggo Mortenson’s character is married to Maria Bello’s. They have a son who it seems might be a step-son. As the story unfolds we find out he can handle a gun and the mob seems to know of him. That’s where the plot begins to squeeze you. Ed Harris plays a wicked mob leader who appears to have ben injured by Mortenson’s character. As a result, he wants to take him out of town. His family and the sherrif are all baffled because he has seemed to be a good old boy as long as they have known him.

He has some open chapters to close so he leaves town to do that. That’s where the excitement really begins. I give this film a 6/10 because I thought the love-making scenes were a lottle forced and unnecessary. I don’t think the rest of the film lived up to its potential.