My score 9/10. They put horses out to pasture when they’re old. Elephants are said to migrate to a certain place to die, it’s instinct. There is no such ritual for people. If we’re lucky, we retire from work sometime between age 55 and 70 and we live out our lives with what passions and hobbies we have left. in between doctor visits. This is a story about a man in that phase of life who is trapped yet open to learning what the universe might have to teach him. 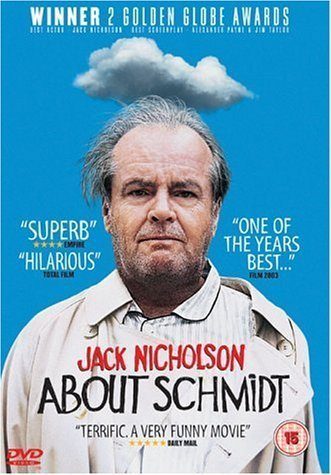 A man upon retirement, embarks on a journey to his estranged daughter’s wedding, only to discover more about himself and life than he ever expected.
Director: Alexander Payne
Writers: Louis Begley (novel), Alexander Payne (screenplay) | 1 more credit »
Stars: Jack Nicholson, Hope Davis, Dermot Mulroney

Our director, Alexander Payne, is behind “Nebraska” and “Sideways,” two films I absolutely loved. Based on these plus this film, I’d say he likes to focus on individuals facing challenges in their human journey. This film definitely can be filed in that category. There is humor within that context but I would not classify it as a comedy, it’s more a drama. I think Schmidt learns a lot in this film and his lessons are our lessons if we have the ears to hear. It’s a great film about being human and I recommend those every time 9/10.