I don’t understand why the critics tend to rate this movie down. To me it was exciting and suspenseful. It had only one flaw: in a time of amazing technology (the film was made by Sony) the creature looked awfully fake. 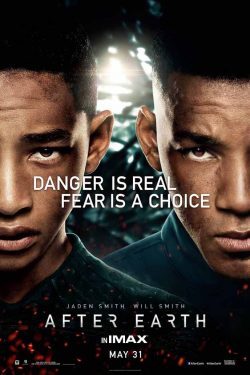 I watched a movie tonight in preparation for the podcast I’m doing with a new movie reviewing friend Darren Lucas. We’re set to discuss the movies of M. Night Shyalaman, this was one I hadn’t seen yet. There is one scene that reminded me of “Signs,” truly a masterpiece of his. When the boy is recovering from being poisoned by a pink giant roach, he summons the strength to face a large beast. It is like slow motion and reminded me of the scene when the father in “Signs” tells Merrill to “swing away. I found the vibe very similar. There is another scene like that I can think of in his psychological fun “The Village.” All three of those movies are definitely worth seeing and I recommend them.

The bare bones version of the story is that a son, trying to please his hero father, tries to do the impossible. Against all odds he is trying to save the mission. In the quest to be victorious, a best is faced. It’s a great premise for a story. Everything takes place after the earth has become uninhabited by humans.

My word to the wise: When I do a search on Google of this film, a lot of titles indicate that it is a production of “Sony Films.” I don’t know why but this liked peculiar to me. It’s as if they spent millions on the film but never got past the promotional sites it debuted with. It’s lees of M. Night “art” and more of a “wannabe” sci fi blockbuster that never made it the distance. Having said that, it was highly enjoyable as an action, suspense, sci-fi Obie. It didn’t have the signature of M. Night for me, which is a “twist” at the end. I got the feeling he was trying something new.

2 Replies to “After Earth”