The concept of an unknown creature (the xenomorph) being inside you and feeding off your insides is a bone shivering one indeed. That was the concept that catapulted this first of the Alien movies into orbit. 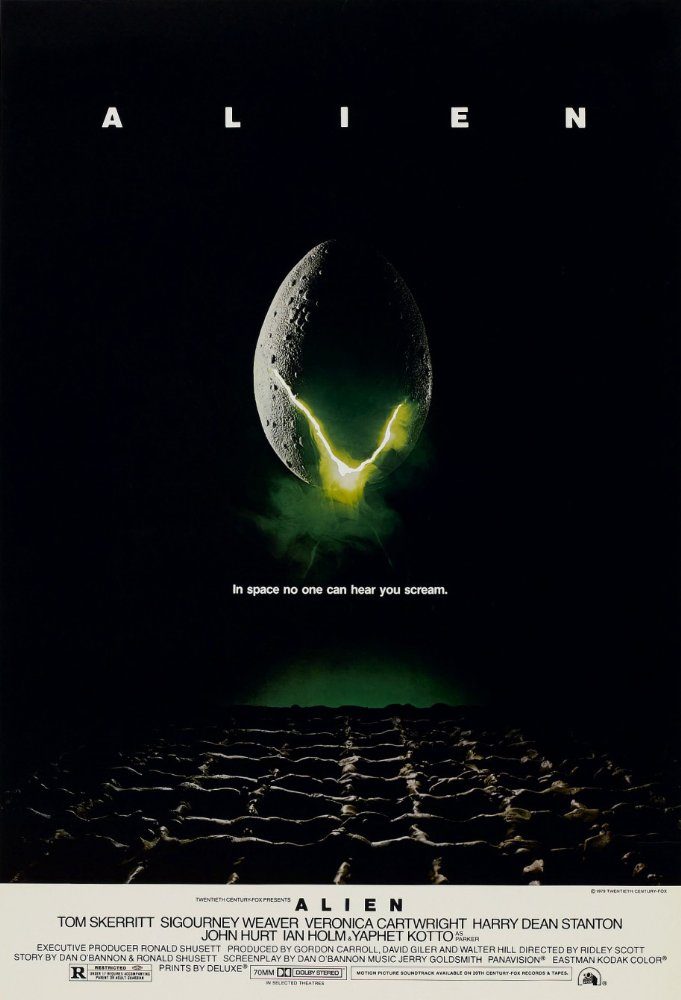 “After a space merchant vessel perceives an unknown transmission as a distress call, its landing on the source moon finds one of the crew attacked by a mysterious life-form, and they soon realize that its life cycle has merely begun.” -IMDB

Director Ridley Scott had a vision to get this done and he did it with real props, costumes, and a lot of goo! You won’t find any cgi in this film, just well sculpted and shiny creature heads and protruding sharp teeth.

There are so many amazing actors in this first film but Sigourney Weaver will always stand out to me as strong first impression. She is the one who takes on the creature. It’s as if she is attached to it, like its mother. But this mother/child relationship is only host/parasite. The creature wants to kill her and use her to make more offspring.

Like Blade Runner, there is the theme of androids in this film that makes it very interesting. When the android is destroyed for telling the crew they are doomed, it’s his head alone that does the talking. In 1979, special effects were like parlor tricks, they had to use what they had to get the point across. Sometimes, this makes for better effects.

Alien is a space story about a ship sent to retrieve colonists on a far off planet and return them to Earth. They discover a vicious alien lifeform on board that is engineered to wipe out the human race and only they can stop it.

After multiple watchings through the years, I have to say this film is still scary to me and I marvel at how well done the analog effects are. The story is excellent and I hope every horror or sci-fi fan gets a chance to see it once in their lifetime. The acting and the story are top notch and it’s a career high for Ridley Scott as director.

FINAL THOUGHTS
Black outer space is scary. So is being alone. Add to that the fear of an unknown, “Alien,” creature and you have the potential for a terrifying film. Ridley Scott managed to create that. It’s probably one of the most scary films out there in this genre. The idea that nature is cold and uncaring is always a fascinating concept in a movie. Whether it’s a white whale or a 1,000 pound Grizzly Bear, nature needs to feed and it will at any cost in order to survive. In this film, we are held before scenes of nature in its rawest form, uncaring, feeding. It’s a mind-blowing film, I give it my highest recommendation possible to everyone, except young kids say under 8 years old.