(An audio and written review) A friend who lives in England told me there isn’t much interest in American political scandal. I hope that’s true because some of our stories here in the US are embarrassing.

The conservatives wiretapping the liberals. It sounds like a cartoon movie, a joke if you will. Folks, lest we forget Watergate, it happened. This films gives a solid background of how it was discovered, reported, and used to take the president out of office. 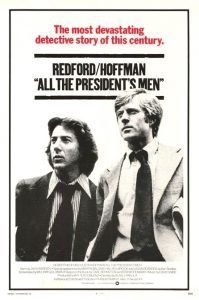 Director Alan J. Pakula gave us “Sophie’s Choice,” an incredible piece of film. How would YOU choose? That’s what the world keeps asking wherever it’s shown. I don’t usually pay attention to the producer’s name but they do provide the money and they have some input as far as that goes. So, having said that, he produced “To Kill a Mockingbird” in 1962. If you haven’t seen this classic movie you must. If you have, I’ll just let that sink in a minute.

Okay, back to the review:

There’s a new movie out called “The Post” that people are saying is a sequel to this. It isn’t but both are based on real life events. “The Post” is also an excellent film that details the way the press uncovered a government coverup of the atrocities and losses in Vietnam. It’s similar in the way it depicts the government trying to pull the wool over the eyes of its citizens. I don’t think it’s too far off to compare the themes of these films to what’s going on with the sitting president now. “The Post” is up for best picture and I really enjoyed it but this review is about a film that came long before it. Log live the press I say!

Dustin Hoffman and Robert Redford play in “All the President’s Men” the two reporters that broke Watergate. They act out their lines among many actors you know nd love now though they looked a lot younger then. The way these two men play these roles makes this film a feat and something to study for future generations. Whether you like American scandal history or not, this is an incredibly engaging film. I give it a 10/10.