Why are gifted musicians crazy? It’s true, they really are. Wolfgang Amadeus was among the most loopy. He had a woman in his life who truly cared for him but basically his private life was a train wreck but didn’t he make beautiful tunes? 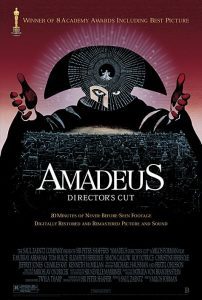 Another item we see in this film is the evil mentor, the Obi Wan who seeks to take down and destroy his apprentice. You can’t blame Salieri for hating Mozart, after all he was practically composing out of the womb. He had “an ear” while others only had hard work and traditional training on their side.

In Mozart we see an annoying freak. We also so a tortured young man who was “above” us all. He heard the songs of the gods and brought them down to us. This is a highly entertaining film, despite a few lagging and questionably accurate segments. If you think it looks boring because of the classical music though, think again. I recommend this film to lovers of music, history, and passion filled biographies.