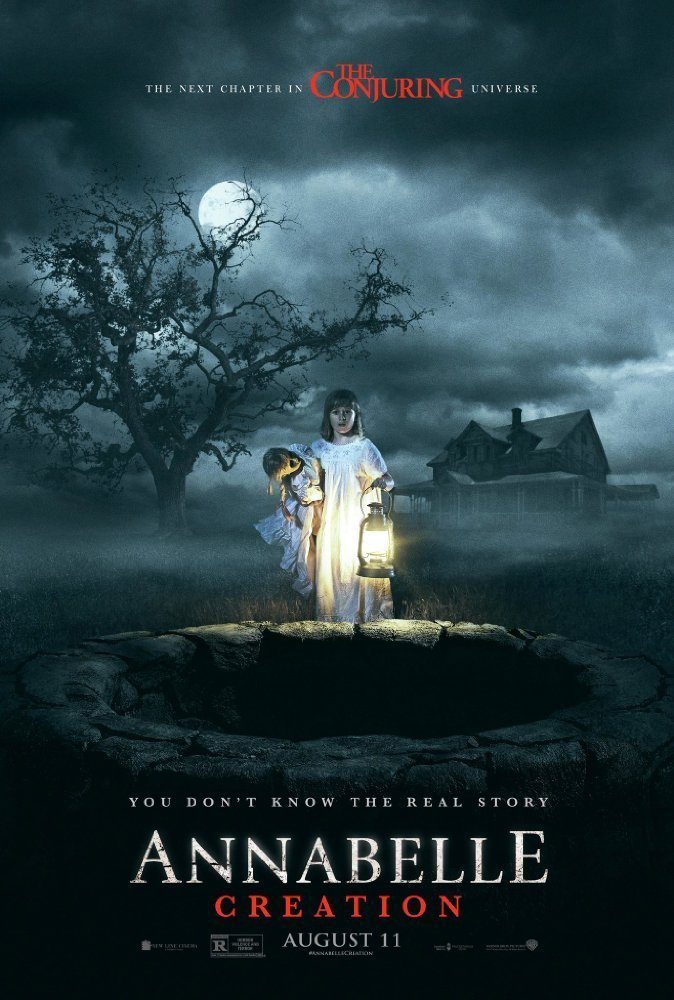 12 years after the tragic death of their little girl, a dollmaker and his wife welcome a nun and several girls from a shuttered orphanage into their home, where they soon become the target of the dollmaker’s possessed creation, Annabelle.
Director: David F. Sandberg
Writers: Gary Dauberman, Gary Dauberman (based on characters created by)
Stars: Anthony LaPaglia, Samara Lee, Miranda Otto

Some of you may have seen the short Light’s Out that came out a few years back. It was made by a new director named David Sandberg and he is the one who directed this film under the production leadership of James Wan. Therein lie a few troubles I see. If you are making a movie a producer hires you to do, you are slave to his vision: not yours and not the audience’s. Annabelle is a story that is very close to Wan’s heart but I felt watching it that Sandberg was probably not as into it. I felt much the same about his full length film Lights Out that came out last year. Wan put spring in his step and commissioned him to create a full length movie based on the short. Even though it was his own idea, it feels like Sandberg tried to do a “son of Insidious” or “The Conjuring.” I think Wan should have bankrolled Sandberg to create his own film, free from trappings of Wan visions. But who am I to want things?

The actors are very much standard and flat. They are not memorable in this script and anyone could have played any role. No one stands out, except the dolls that is.

The story is this: A young couple with a 9 year old daughter (or so I assume her age is) lose her when she is hit by a car. They are so distraught, they pray to “any force that can help them” to allow them to talk to their dead daughter. This is very cliche and seen in so many movies. ie; The Other Side of the Door, all zombie movies, A Dark Song, etc. Instead of having their wish fulfilled, they get the devil himself who manifests in the Annabelle doll. This is revealed through kids who come to live in the house of the couple that has been turned into an orphange. They learn the demon or devil in the doll and scarecrow is mean as hell as well as bloodthirsty. I could go on but I don’t want to.

This movie suffers from not showing enough cool scary faces and props. They flash by but I want to stop and look at them. Sandberg focused too much on multiple jump scares that don’t show anything. It’s textbook cheap thrills. It is also an awful script that tries too hard to be a prequel to existing movies. I enjoyed the film up to about the 2/3 part. Then it was just a waiting game for the credits. It reminded me of Quija 2 but Ouija 2 is MUCH better.