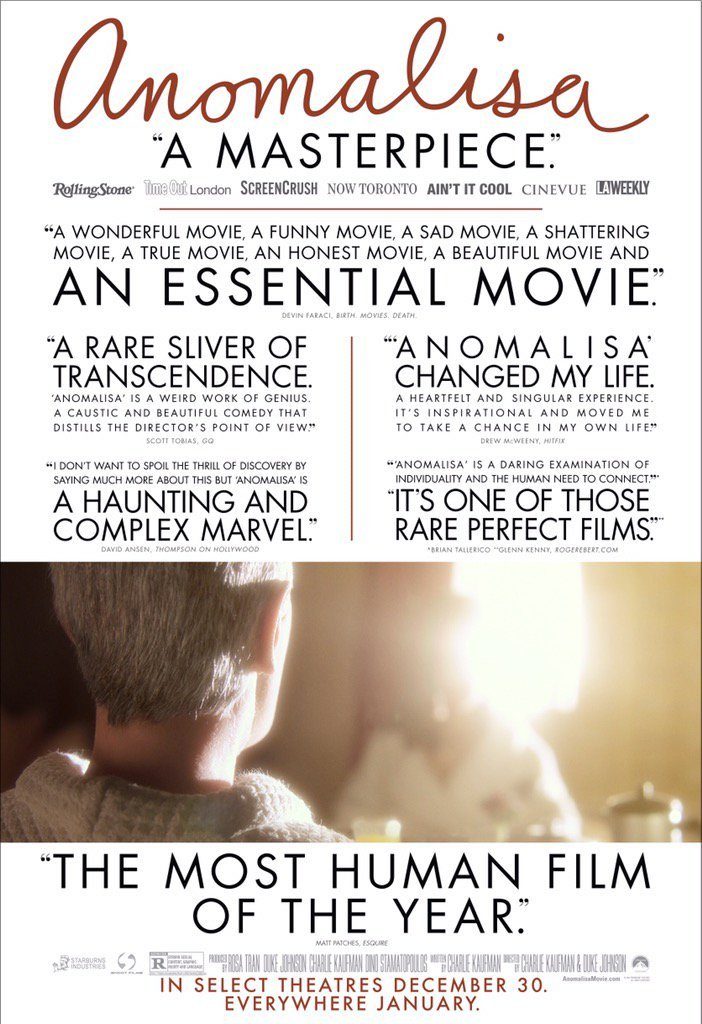 Title: Anomalisa
Genre: Animation, Comedy, Drama
MPAA Rating: R
Year: 2015
Director: Duke Johnson, not many credits to his name, Charlie Kaufman, known for “Eternal Sunshine of the Spotless Mind”
Top Billed Cast: David Thewlis, known as Remus lupin in the Harry Potter films, Jennifer Jason Leigh, “Fast Times at Ridgemont High,” “The Hateful Eight,” Tom Noonan, “12 Monkeys”
Brief Synopsis: What kind of story about our humanity can better be told through animation?
My Word to the Wise: Some will quickly turn off to this quirky, sometimes slow animated film. Others who have the patience to see what’s in here will be delighted by the characters, the sets, and the messages that are open to interpretation. It is a life we are watching, maybe it’s a microcosm of our own?

Michael Stone is the main character here, voiced by David Thewlis of Harry Potter Fame, and he is working his way to a conference in Cincinnati where he is be the keynote speaker supporting his book. The book is on customer service. In a taxicab and soon after that in a hotel room, he begins having visions of his boring life. All the women he meets have a man’s voice as well, I should tell you that in case it becomes important. Through a sequence of events, Michael has a one night stand with Anomalisa.

He regards her for many reasons but mostly, probably, because she is the only woman in his world who has a woman’s voice. One more significant thing, at one point, Michael’s face falls off and he has robotic lights underneath. Such is the oddity of this film.

I liked it because of the beautiful sets and amazingly real looking stop action animation. If those two items don’t get you motivated to see it, you might save it for a rental. If you’re looking for something different, this dreamlike film definitely qualifies.

I found it oddly entertaining. Because it is too quirky at times and some of the messages, not all, are obvious and take a lot of screen time, it lost a point with me.