Sometimes the new apartments get planned without getting everyone out of the old ones. In this case we have Sonia Braga (Kiss of the Spider Woman) refusing to leave her apartment for sentimetal reasons. I think the director and writer does a great job examining what happens at this rift between people. 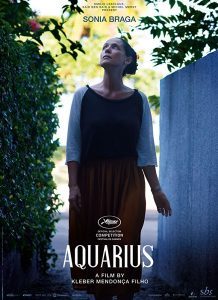 Clara will not leave! Director/Writer Kleber Mendonça Filho starts us off empathizing with her. The corporate greed wants her put to start a money making venture and she is literally in the way. The writer and director light has been triggerred. That winds a lot of points with me. The mind that created the story puts it on the screen as well. A mighty task.

The obnoxious activities that go on all around her apartment will resonate with anyone who has had raucous neighbors. As a cancer survivor, she states she will not be easily moved. This was a giid character study as well and a piece about humanity. I gave it an 8/10