The film Argo is the story of how a CIA team rescued hostages from Iran. It is based on true events. In this film, the horrors of 1979 Iran contrast with the humor of making a fake movie making it both serious and comic. 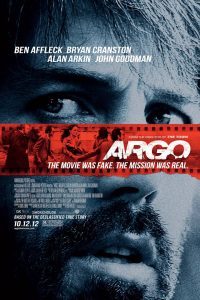 Argo is directed by Ben Affleck, known for the Town and a host of other movies. It has a star cast that includes: Bryan Cranston as Jack ODonnell, Alan Arkin as Lester Siegel, and John Goodman as John Chambers. At time of this review, it is the number one movie at the box office. It tells the suspenseful story of how our government saved hostages from Iran under the guise of scouting a movie location.

The basic story is as follows: The American embassy in Iran was invaded in 1979 by Iranian revolutionaries. It was a bloodbath. Six Ambassadors escaped to the home of the Canadian Ambassador. The CIA is charged with the impossible job of extracting them from the country. Tony Mendez comes up with a highly unsupported plan to smuggle them out posing as a movie team. Enlisting the help of a real Hollywood script and professional movie experts, Mendez launches the rescue operation.

One aspect that makes Argo great is its character development. So many movies I have seen recently have flat characters so Argo is a breath of fresh air. It does start out a bit slow but once it begins the suspense is like a building drumbeat that delivers in excitement and thrills. Some of the best parts are the vintage television footage and photographs interwoven throughout. With Iran in the news lately as well as the Presidential debates, this movie adds dimension to a largely forgotten part of the world. I can understand why we may want to forget. It is a gripping sketch of what was going on at that time. It reminds me of what it is to be human and what is so human about American movies. One more thing, the movie is exciting but never as real as when Jimmy Carter himself gives commentary just before the credits roll. I wonder what the current Iranians will make of this. It was classified until President Clinton’s administration declassified it.