Nicolas Cage in a comedy based on a true story about a guy who goes to hunt Bin Laden? Hmm, I said to myself when I heard that. This one is about 2 steps removed from reality in the way Nacho Libre is. It’s entertaining because it’s ridiculous. 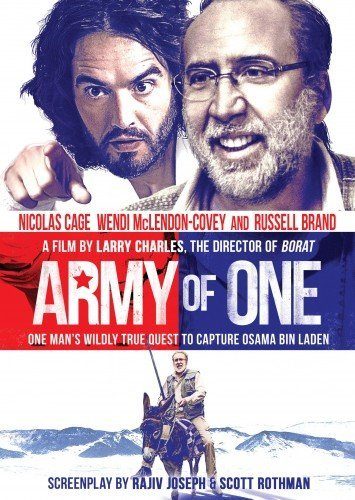 Nicolas Cage plays this guy who has bad kidneys, works as a part-time construction worker, and is obsessed with his mission from God. He needs dialysis a couple of times a week and if he doesn’t get it, he hallucinates. In the film, God is played by Russell Brand which is kind of fitting in the most ironic way possible. I always picture Brand barefoot talk 100 words a second. That’s about what they made him look like as God.

Cage’s love interest, Wendi McLendon-Covey from the Goldbergs and Reno 911, does a great job of falling for him. Their relationship is innocent and she can’t put any expectations on him because he’s just an impulsive freak. Still, there are some touching moments between them. Their relationship is a lot of fun to watch in this film while other parts maybe aren’t so much.

I think the scenes in Pakistan are my favorite. That’s when the movie puts it money where its mouth is. After all, you are now in a different country watching him and everything looks like you really are in Pakistan. The best scene in this setting has to be when he hang-glides down from the mountains in a red white and Blue flag hang glider.

This is a bad movie, make no mistake. I had a chuckle or two because it was an assignment for my podcast discussion group. Having said that, there is something special about directors and movies that just don’t care about appeal. I thought Nacho Libre was in that category. It’s one to laugh at in its incredulity. This is one you will laugh about and share at the thanksgiving table. I only hope for your family’s sake you have no access to play it for anyone.