I sort of have a degree in linguistics. My MA is in English with an emphasis in “language, writing, and rhetoric.” I enjoyed Amy Adams’ character in this film as a linguist. I have reservations about nearly all the rest of this popular film. 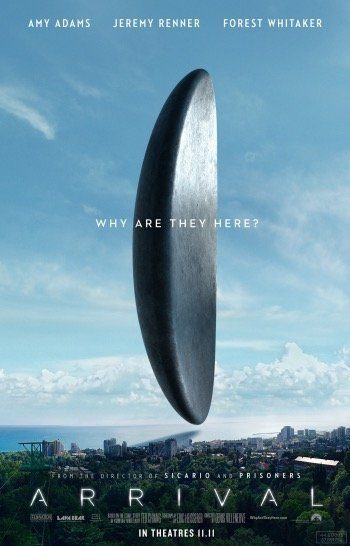 My wife and I just saw this last night on opening night at an antique theater in Santa Barbara. Please be warned:

The rest of my review contains spoilers.

Fans of Interstellar may enjoy Arrival most. It has to do with time and getting outside it. I personally feel this has been beaten like a dead horse in movies. Here, Villanueva uses the theme in attempt to “Ooh and Ahh” audiences once again, in my armchair opinion.

It didn’t move me.

Amy Adams plays a linguist and single mother who has a daughter who dies of cancer. Forest Whittaker commissions her to translate an alien message. It climaxes when she realizes that language determines how you see reality and therefore because she learns the alien language, she is outside of time. She then realizes she married a guy she works with and had her daughter but after sharing all this with her husband, he doesn’t “look at the daughter the same way,” assuredly because he knows she will die.

The big idea is to choose to have the daughter with her short life even if you know she is going to die. Carpe diem.

In short, there are so many effects like the gravity of the space “stones” that are never explained. I wasn’t impressed with the aliens nor with the whole “a language makes me see through time” concept.

It was just ok. I was moderately entertained. Mostly, in the daughter/mother scenes and flashbacks, I was glad I had popcorn and red vines for distraction. I recommend this film for people who have lost someone too soon and fans of Interstellar. Too bad, this could have been a science fiction film as advertised.