“The devil comes from the sky.” -Lex Luthor

Apart from misleading marketing, even down to the very title of the film, “Batman v Superman” is an amazing film that audiences are sure to continue enjoying. The critics at large have dismissed its genius but time will take care of that. 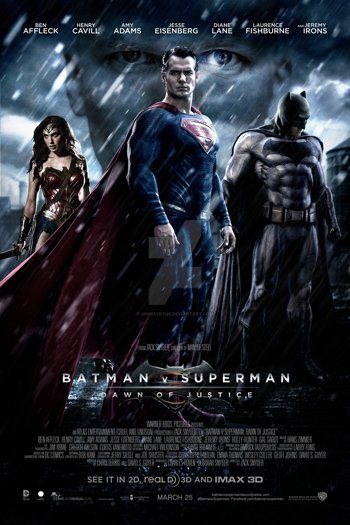 I’ve gone around and around with it in my head and decided I just can’t take points from a movie because it was named and marketed poorly. Honestly though, that’s the only thing wrong with this film. It shines. My nearly eighteen year old son said it dragged at the beginning and was laboriously long but we both agree the mid to end portion is spectacular I thought the whole movie was stellar.

Without giving any spoilers, let me just say the title should have been something like: “Superman 2: Luthor rises.” This is really a Superman film with the usual nemesis Lex Luthor who uses rhetoric to persuade Batman to kill Superman. Does he succeed? Yes and no. You’ll have to see the film. There is some other stuff in the plot I’d love to talk about. It’s a grand scale monster we hear nothing about in the trailers. In my opinion, the monster and Lex are really what this movie is all about.

Ben Affleck plays a great Batman, which many of us felt he would. There is also the debut of the DC character Wonder Woman in the latter part of the film. This was briefly explained. In fact, the intro to her coming on screen was so miniscule, I have to go back and watch it again to get where she came from etc. It was a long and involved film so please forgive me. I didn’t bring my notepad, a mistake that will not happen again.

Another thing that maybe could have taken a star from my 5 star rating of this behemoth, beautiful film is the insertion of histories, mostly on Batman. Now we all know Bruce Wayne’s parents were killed in front of him as a child. Scenes like this and others are plentiful in the early part of the film. I would have rather they not be, they aren’t relevant. Still, this film picks up and gets you on a ride that all you’re thinking is “I can’t wait to tell my friends about this.” Don’t believe the critics on this one. I found it much preferable to the critical darling “Deadpool.” I highly recommend it.