Recently I saw Drive and it had that 80’s background synthesizer mood. Soon that I saw Turbo Kid that had similar background music. Could this be coming back? It works for me! 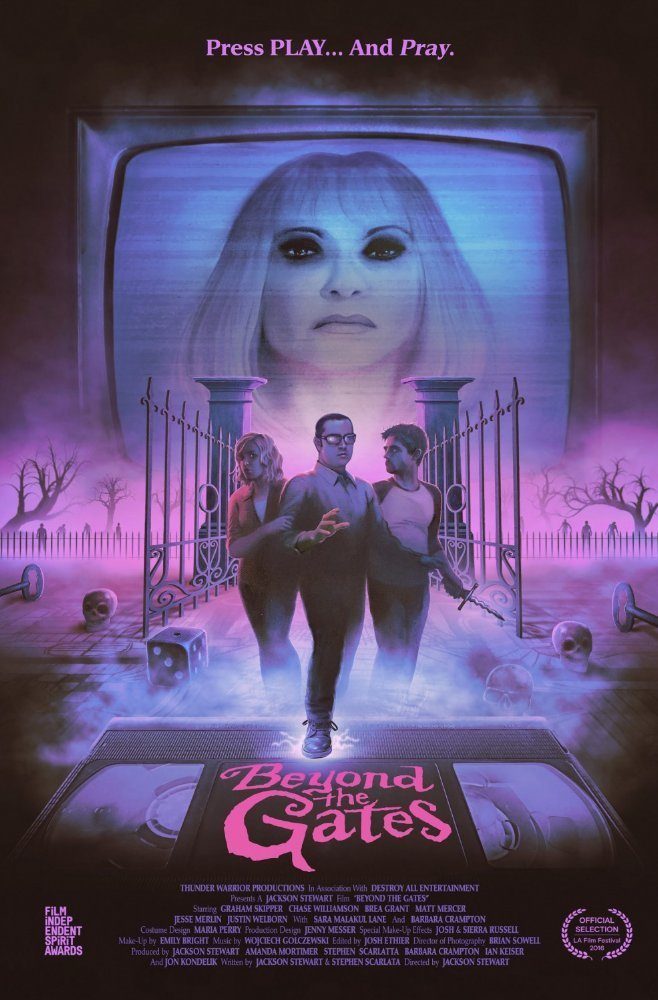 Two estranged brothers reunite at their missing father’s video store and find a VCR board game dubbed ‘Beyond The Gates’ that holds a connection to their father’s disappearance.

This one does uses that 80’s synth sound too only it’s decidedly a horror/thriller film unlike the thriller Drive or comedy action Turbo Kid. When your budget is low, you have to get creative with sets and effects. This film indeed does that effectively. What better concept for a film like this than a VHS tape that opens the door of hell?

The story revolves around a guy, his girlfriend, and his estranged brother who he grew up with in a small town. The protagonist’s dad owned a VHS store there and so the protagonist and his brother spent a lot of time hanging around the movies and playing with reminders and other equipment there. They stumble across a tape that is what used to be known as a VHS RPG. In this case they are given clues on how to get “beyond the gates” and reunite with their father who has mysteriously disappeared.

There is blood and guts and it ends up being a pretty “jump scary” film. Even so, a goofy vibe permeates the whole film. It reminds me of the inside jokes of nerds from high school woven into a film that most viewers wouldn’t laugh at or be scared by. Nonetheless, I found it a lot of fun. The ending is ridiculous but it takes itself so seriously you can’t help but find it satisfying.

Final Thoughts
Beyond the Gates is a low budget horror/thriller that brings you back to the 80’s horror mood. The synthesized music seems a virtual red carpet for Michael Jackson’s dancing thriller zombies. The effects are creative, though not very believable yet that isn’t important in this fun under-produced film about playing a VHS tape that opens the door of hell. I would say that not all will “get” this one. It took me two sits to actually finish it. Still, if you can shut the world out and just enjoy low budget horror with a somewhat silly story, this is your movie. To you and fans like you (like me), I recommend it.