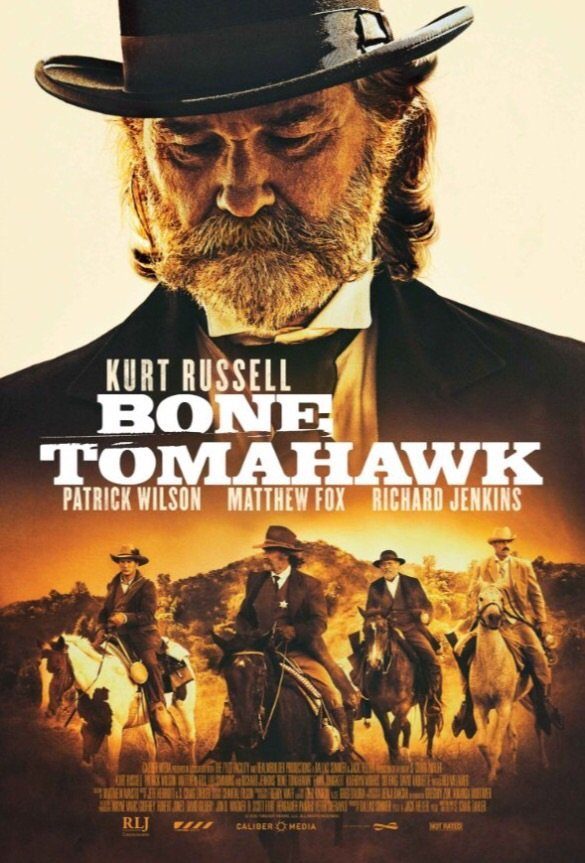 Title: Bone Tomahawk Genre: Western, Horror MPAA Rating: R Year: 2015 Director: S. Craig Zahler, known for being a relative newcomer. Top Billed Cast: Kurt Russell, Patrick Wilson, Matthew Fox, Richard Jenkins Brief Synopsis: When the town doctor falls into the hands of canniballistic indians, The Sheriff and his men must rescue her. My Word to the Wise: If gore ever fit masterfully into a well-acted Western, this is such a place. Fans of either or both should see this film.

It’s highly likely that relative newcomer writer/director S. Craig Zahler creamed his jeans when he was able to cast Kurt Russell as the lead role in his film. In the same year, darn near the same month of release, Quentin Tarantino’s hit “The Hateful Eight” came out with Russell as one of its lead players. That film has done extremely well for Tarantino and I predict “Bone Tomahawk”will match that success.

Kurt Russell plays a sheriff and he isn’t the only well known actor that is well cast. Highlights for me were: Matthew Fox, known for “Lost,” Richard Jenkins, who I will always remember as the sad sack in “Eat, Pray, Love” though he’s in a ton of films, and David Arquette as Purvis. Please take note of the huge cast of very good actors in this film.

I’m a Western junkie from way back. Probably the first modern one I went crazy over was Tombstone, which yes also starred Kurt Russell. This one starts out gory and pretty much weaves that particular throughout. If you were setting out to make a gory Westsren, it would certainly make sense to write your own story around cannibalistic indians. This new director did just that and lest we forget, Tarantino usually wears both hats as well. If you’re a western buff like me, go see this movie! If horror is more your thing, same applies to you. If you like both genres, you’re in for a treat. Get the largest  Coke they sell, a huge popcorn, a date is always nice and enjoy the huge entertainment of this film.