Slacker, lazy bones, shiftless youth, juvenile delinquents, whatever you can call this type of person I think it exists in every society. But what if this person was the anti-hero of a movie? Could a director pull that off? I’m not saying he does or doesn’t but here you have the premise of this film. 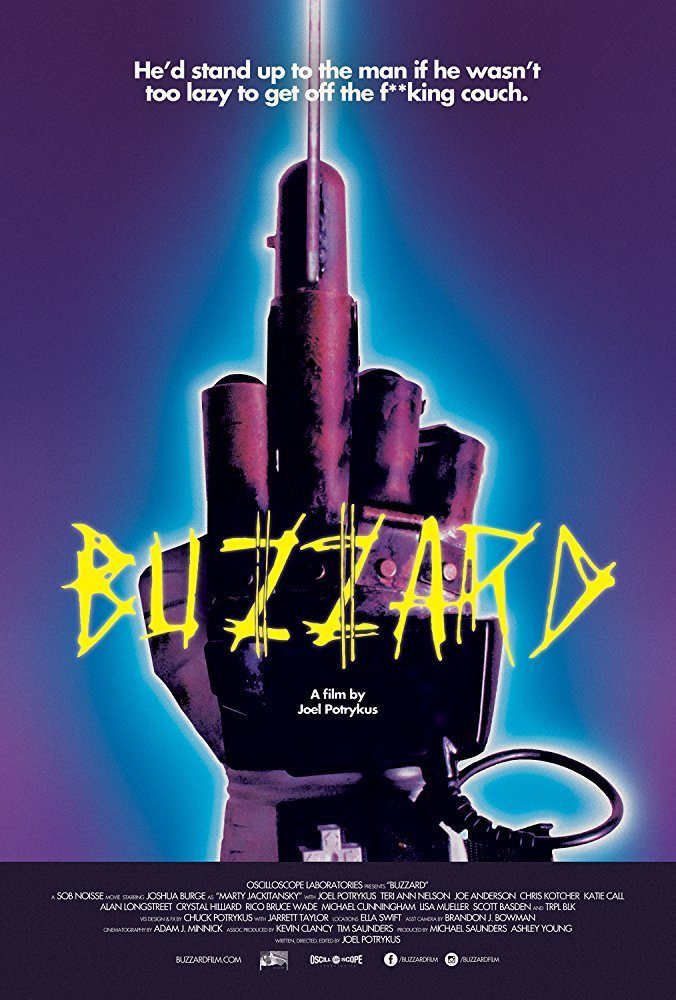 Paranoia forces small-time scam artist Marty to flee his hometown and hide out in a dangerous Detroit. With nothing but a pocket full of bogus checks, his Power Glove, and a bad temper, the horror metal slacker lashes out.
Director: Joel Potrykus
Writer: Joel Potrykus
Stars: Joshua Burge, Joel Potrykus, Teri Ann Nelson

I like director Joel Potrykus’ stuff. I did a review and a podcast of his “Alchemist Cookbook” film and I really loved that film. If these two films are any indication of what he’s getting at, it appears to be disillusioned people in society out on the fringe trying to get something for nothing. At least that’s the case in Buzzard. He is resigned to what he can achieve through a temp agency. It’s as if he thinks there are no other options for him, or maybe he just doesn’t like those options.

The protagonist fashions a finger knive set like the glove Freddy Krueger wears in “Nightmare on Elm Street. Only this one is made from a Nintendo computer game glove.

We watch him make more and more anti-society and even criminal decisions as he falls deeper into his own consequences.

The glove represents the one in the middle: not middle class and not impoverished but much worse: bored and lazy. He has just enough resources to become a criminal.

This is a very interesting case study of its protagonist. There is a lot of dark humor if you get the sarcasm. I really enjoyed this film and if the material sounds interesting, I recommend it to you. It has a goofy quirkiness about it that detracts a little from the story. It looked a little too low-budget at times. Perhaps expanding the setting would have helped? I really will be watching this director, he is very talented.  7/10.