I’ve known women who are batshit crazy and loved them anyway. I’ve known women that are outgoing and ambitious and play by the rules and seem normal despite their inner craziness and loved those too. There’s something lovely about most women in the world but when it comes to mental illness, most people lose the affection. This is true mostly because society as a whole doesn’t understand mental illness, we are an ignorant human race. 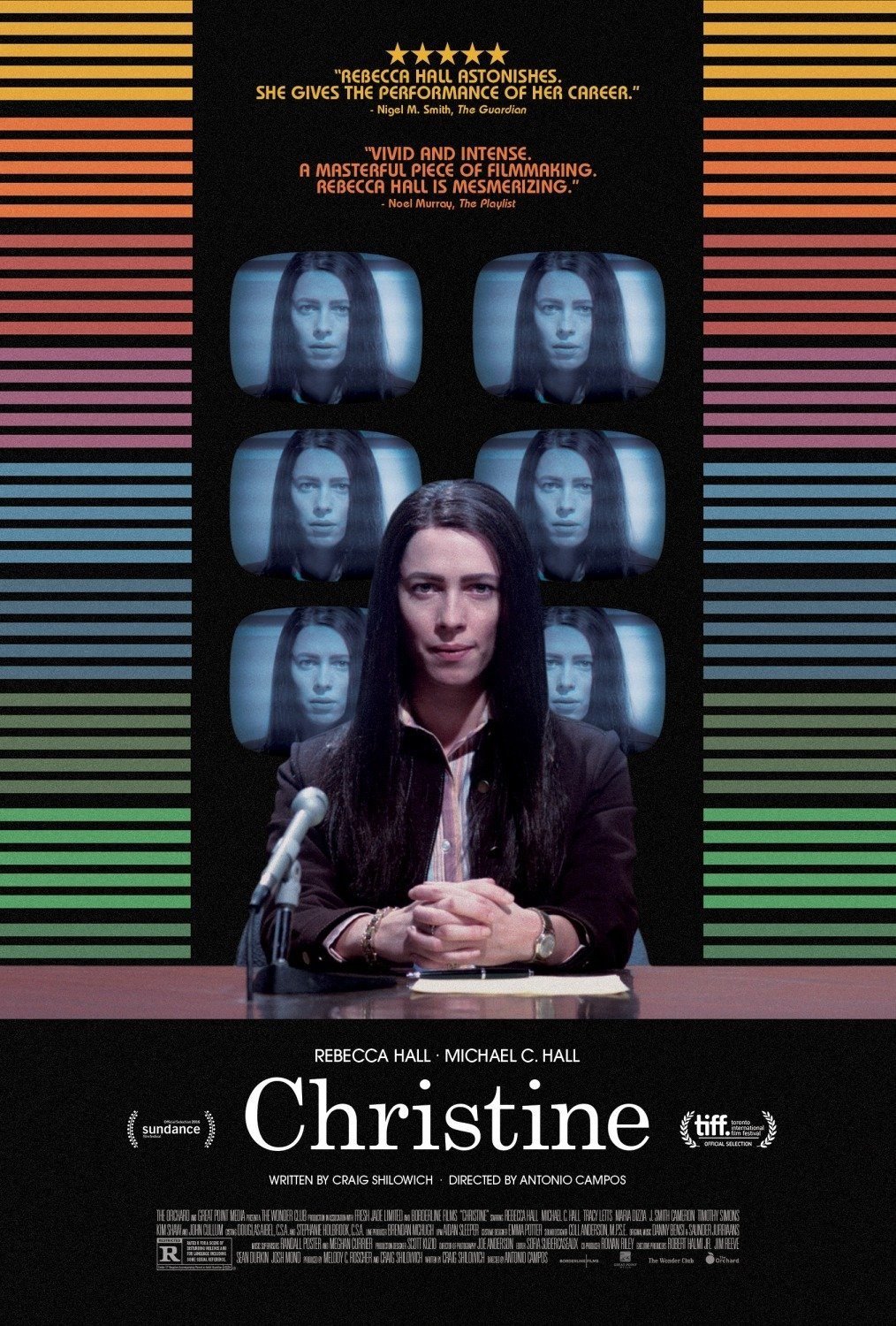 “The story of Christine Chubbuck, a 1970s TV reporter struggling with depression and professional frustrations as she tries to advance her career.” -IMDB

We understand drive and tenacity but not a twisted version that would take the life of its sufferer. Some people can never be helped to feel good, they are tortured souls plain and simple. Christine is one of those and she fit so well into the background of news reporting that no one ever noticed. Rebecca Hall does a great job portraying this tormented character.

The performances are ok, just enough to get through a very dull yet controversial story. What’s really controversial is the ending, not her life’s work as a reporter.

Christine is a movie based on true events. It’s about the 70’s tv reporter who shot herself in the head on television. There is some
character development to help the viewer me to a conclusion as to why she would do this. The most powerful in my opinion is the stuff about her depression and being hospitalized for it. She shares a couple times that she feels as though she is being baby-sat by her other while at the same time playing the grown-up role by paying the rent and all expenses. This did seem very unfortunate for her.

Meanwhile at work, her boss/tv producer is pushing everyone to get more shocking stories for the show. As she would call it: “blood and guts.” I’m not sure exactly why I wasn’t highly impressed by this film. I am very interested in films presenting mental illness.

Perhaps I don’t understand what would make a person do this. She did have a number of serious life challenges going. I also didn’t like the
side stories about her dating Michael C Hall’s character, which turns out to be a dupe. To me, the choices are thin storytelling. Then again, that’s the story of this depressed woman on a news team. Maybe we’re just meant to watch it and take it in without a thumb up or down, just acknowledge there are people like Christine walking among us,
silently.

Ultimately, what we have here is running time of a woman’s life and death. I think the director means to give us information so we can
assume why she did what she did. It’s not a boring film and it’s not terribly engaging. It is interesting to watch though and even when you
know the end is coming, it’s pieced together with fairly good performances. Again, however, I never really embraced Christine. She was depressed and unable to improve her condition. Perhaps the ending was more her fate than anything that could have been avoided. For
solid performances in this based on true story, I give it a