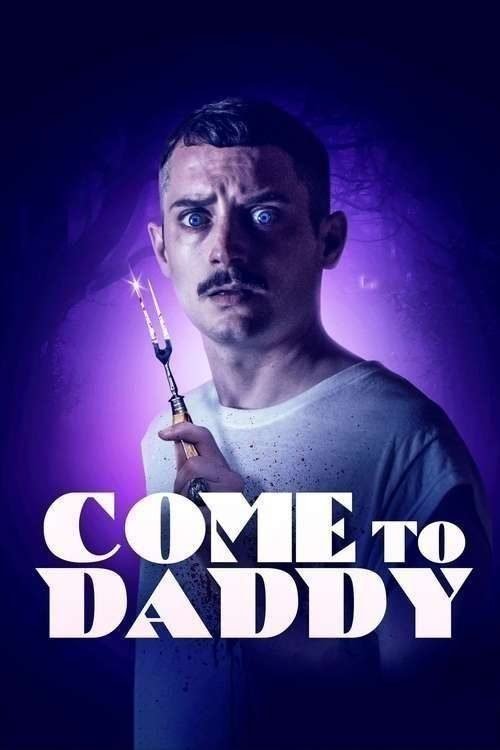 IMDB gives this as the storyline: Norval’s life has been, to put it lightly, difficult. Currently living home with his mother, the troubled young man is coming off alcohol-related struggles. So when he receives an unexpected letter from his estranged father requesting a visit, Norval catches a bus up to his dad’s secluded and scenic waterfront home. Maybe reconnecting with his father will give Norval the emotional fulfillment he’s been lacking. Before long, though, he notices something off about his dad, an uneasy feeling triggered by inappropriate comments and a possible over-dependence on booze. Norval quickly realizes that his hope of father/son bonding is doomed. Instead of a family reunion, he finds himself in a waking nightmare.
source

Elijah Wood alone is a major reason to watch this film. He wins for worst haircut and neck tattoo in an ensemble but we all like watching him, so if you haven’t seen it yet, give it a watch. If you have seen it, you may agree or disagree with my take. Please leave a comment explaining what you liked or disliked about my review. I have multiple places you can reach me: rileyonfilm.com, Riley on Film my Facebook Page, or Riley on Film on Twitter. To divide up my many thoughts on this film, I offer this: This film works as a horror because of its 1) director, 2) star quality, and 3) well-placed hardcore violence that is borderline comical (because it’s so graphic).

First, the director Ant Timpson. As a horror fan you will recognize the movies he’s made: “Turbo Kid” and “Housebound” to name just 2. I think the big actors in this probably took the role because of this avant garde director. He knocked the ball out of the park with this one. There is usually a comedic element to his films but they are intense and often scary (I don’t know how scary I would rate Turbo Kid but it’s graphic). So now that you know the director is established and talented, let’s look at the stars in this film.

Who can think of Elijah Wood as any character other than Frodo Baggins? I sure can’t. He plunges earthward though in this film, showing he has the chops to do much more. I hope we see him in more horror. In 2012 he starred in “Maniac” which holds its own with fans as a solid slasher horror. Let’s hope he keeps on the horror tip. But he’s not the only star quality in this film.

Stephen McHattie is becoming known for a lot of Typecast roles. This is for good reason because I plays the scary old emaciated man role well! He is the DJ in the indie horror modern classic “Pontypool.” He’s great in that and delivers a class act performance as what I will call “the original dad” in “Come to Daddy (Gordon). His gravelly voice and visage make the scenes come alive with suspense and horror. All that is prior to “the fork scene” where a Thai actor is emasculated with the rustic utensil. This is one of the most violent kill scenes I’ve encountered in recent years. I suppose a worse one is done with a straight razor down Brian Cranston’s character’s arm in “Drive.” But I digress. But that brings me to the third viable element in this film: the well-placed violence.

In addition to the soon-to-be-famous fork killing, there is a partial decapitation that should have audiences squirming. IMDB labels this a comedy as well as a horror but I think that would only apply to the black comedy label. These are brutal kills. They’d fit in the context of the story though.

In conclusion, I hope you see and agree with me these three attributes make the film a must see for horror fans. I gave it a 6/10. Where it lost points were in the long spaces between kills and other milestones of the plot which were lagging a bit. It could have had more exposition of the characters of it could have just been shorter. I would still make it required watching for my class on Horror (If I ever teach one).