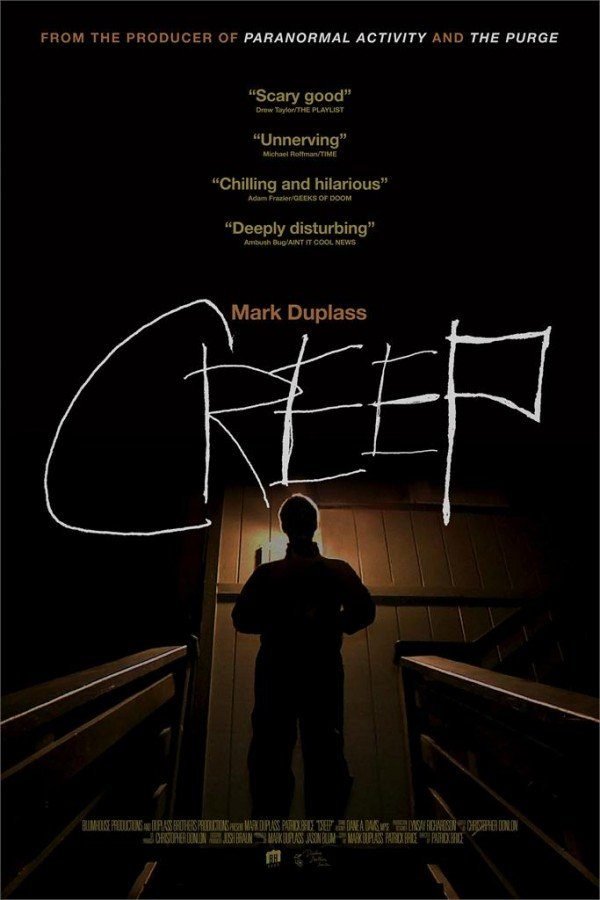 NOTE: At time of my repurposing this post, “Creep 2” is in the works. But as far as Creep goes: the “found footage” genre strikes again. This time we have a psychotic in our face most the movie. The movie scares because it is plausible.

While we may not be able to divine his intentions, the “creep” does everything in a way that is believable, possible. When blood is shed, we don’t question the possibility.This movie could really happen. The plot is a twenty something dude answers an ad for a job filming another dude. The work is one day and it pays $1,000 cash. I imagine a lot of people could use the money and would therefore show up for an interview. Aaron, played by Patrick Brice, does just that. When he gets to the address, he finds a vacation cabin of sorts, not fully secluded. He soon finds out the motives of the employer and much more than just to film him.

Creep becomes a character study in boundaries in a similar way to “The Cable Guy” where Jim Carrey was the Creep. The difference is, this film is horror. Aaron, played by the actual director of the film, misses several opportunities to escape. It’s almost as if he doesn’t want to hurt the Creep’s feeling. Would you rather hurt someone’s feelings or be killed? I think the answer is pretty obvious. At the same time, we humans hate confrontation and so Aaron, as a human, avoids confrontation and plays along.

I’ve seen Mark Duplass in several movies, my favorite being “The One I Love.” He’s a great actor and his ability to shoot lines like a firehose is shown in this film. He is clearly disturbed but the main character Aaron wants to find out just how much. Ultimately, as Aaron tries to get away, the plot becomes a hunt. I enjoyed the thriller aspect of this film but I wondered a lot why it was tagged horror. There were no dismemberments or zombies. It was just Aaron and Joseph talking through mountains of dialog (most Joseph’s)

I’m really not to keen on the found footage genre. Still, this movie used it well. Everything made sense, that it could have happened and been edited together. It lost a point for not being innovative. How many times have we seen the stalker befriend and kidnap someone? It lost another point for calling itself horror. There is a scene or two you could describe as such, but I think it’s better archived as a draa. Fr those reasons I gave it a 3/5. I recommend it if you can’t find anything else to watch. Trust me, there are plenty of movies I wouldn’t recommend as such, this is a good movie.