Horror movies have talked about love and loss before but not usually this deeply. The issues are so deep in fact, one might question whether they belong in a horror film. They exist just the same and while watching this film you don’t just see them on screen, you absorb them. The longing of the protagonist and her helper calling on the black arts becomes our own … “poor us,” as the ritual master says, in that sense. 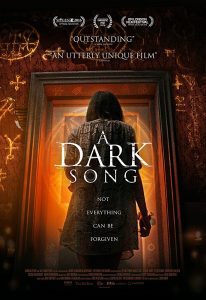 A determined young woman and a damaged occultist risk their lives and souls to perform a dangerous ritual that will grant them what they want.
Director: Liam Gavin
Writer: Liam Gavin
Stars: Mark Huberman, Susan Loughnane, Steve Oram

I can sum up this, Liam Gavin’s directorial debut, by saying it moves way too slow for the first 3/4 but the last act is the stuff you take home to your nightmares. We needed the visuals in the first 3/4, they were sadly absent. I hope when Liam gets his next project he remembers that. I really can’t recommend this film to all horror fans because I found it nearly impossible to sit through but I might say if you have fast forward abilities, go to the final act. You’ll see things there you’ve never seen.

Back to non-spoiler territory: The protagonist has lost her son to occultists who ceremoniously murdered him. She pays another occultist to take her through rituals to enable her to talk to her guardian angel and her son to seek revenge. It’s gritty and you expect typical demonic stuff that only lightly comes. It is basically a hodgepodge character study of two dysfunctional people churning, tortured by desire and vegeance, seeking to call on the supernatural realm for relief … and failing. The end third is worth it. This is a movie to discuss, without a doubt. Watch for Liam Gavin’s future work as I will.