One of Director M. Night Shyamalan’s stories was adapted into a screenplay and made into a movie. This is a different way to market something of his because he usually writes, produces, and even acts a small role in everything he makes. This time, he just gets the producer credit. 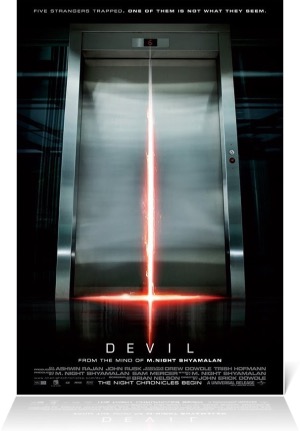 Devil is a combination of light horror (PG-13), mystery, and thriller. It’s hard to believe all three of those can be pulled off from inside an elevator but they are.

Devil is directed by John Erick Dowdle who recently directed Quarantine and The Poughkeepsie Tapes. He’s created a movie that looks smart and interweaves all three genres previously mentioned to make a scary, engaging movie that adolescents and adults will love. This film is not for kids. There are some bloody scenes that kids shouldn’t see. Having said that, it is pretty tame material for 13 and up.

The premise of this movie is that the Devil has entered an elevator at a metropolitan high-rise. The people locked in the elevator all have one shared flaw: they refuse to take responsibility for their mistakes in life. In each person’s case, the mistakes have caused death or other harm to befall innocent people. The Devil delivers justice in clever ways. There is a twist, as in all of M. Night’s movies. The twist reveals the mystery and so ends the movie.

The acting is top notch. The cast is a set of relative newbies. A notable performance however is given by veteran actor Jenny O’Hara. All the acting in this movie is given with a visible purpose and it makes the mystery all that much more fun to try and figure out. You feel like the characters are so real, you have a chance at figuring out what the end point will be. I find it incorrect that the movie is being marketed as a horror movie. I almost missed it because of such marketing. It is more than that. It reminds me of Rod Serling’s short Twilight Zone episodes. We can take a moral element from it and that is rare in today’s sound byte movie culture. So, to do my part for my blogging ‘compadres,’ I’m clearing up the misconceptions. This is a smartly crafted film. There are a lot of movies out there that are scary, but not many that leave you deep in thought as Devil does.