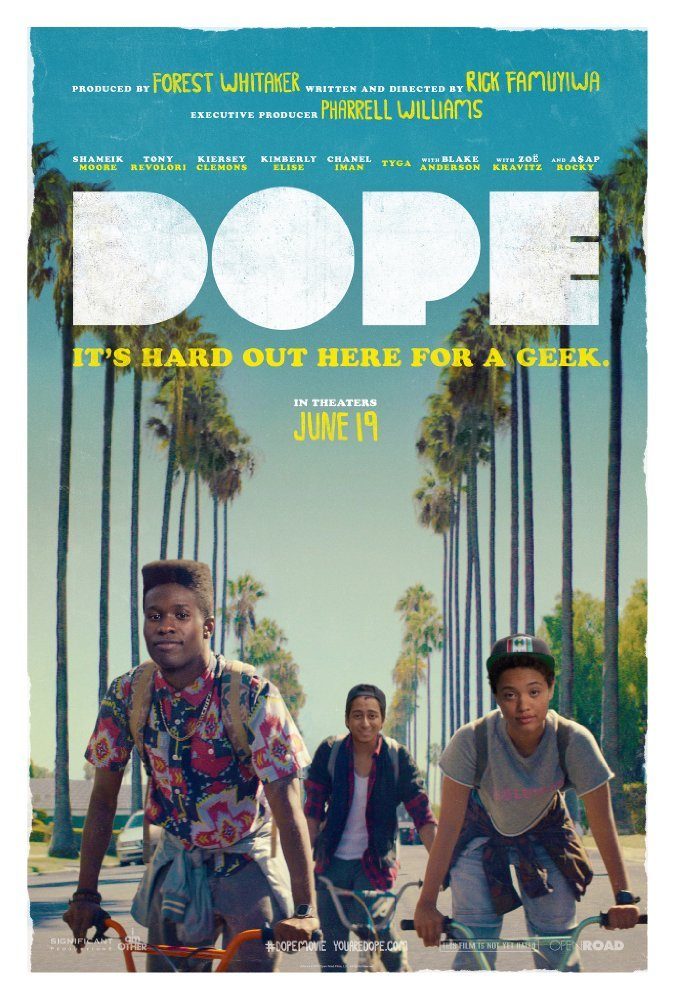 One Sentence Summary: A humorous and cynical presentation of how a black high school senior learns some hard truths about the world.

Cast: Shameik Moore as Malcolm, this is his first acting role. Tony Revolori, Malcolm’s close friend and bandmate Jib, known for “The Perfect Game” and “The Grand Budapest Hotel.” There are many others in this large cast.

Malcolm is a geek, carefully surviving life in The Bottoms, a tough neighborhood in Inglewood, CA filled with gangsters and drugs dealers, while juggling his senior year of college applications, interviews and the SAT. His dream is to attend Harvard. A chance invitation to a big underground party leads Malcolm and his friends into a, only in Los Angeles, gritty adventure filed with offbeat characters and bad choices. If Malcolm can persevere, he’ll go from being a geek, to being dope, to ultimately being himself.” imdb

My Thoughts: A very funny “Senior in High School who’s graduating” movie. It is narrated by Forrest Whittaker which connotes a black culture theme. Producers include other famous black people like Sean Combs. This movie shines a light on how tough it can be for a young black man to live in Los Angeles and make it to college. There are many significant particulars, like the monologue to the camera at the end that reveal a sense of injustice and racism that still exists in the world. I thought many parts of it gross so it lost points there. Still, I feel the protagonist triumphs in the end which is the conclusion I hoped to see. Some will argue he fails by succeeding, that is left up to the individual. Besides all that, it has a ton of hilarious moments to enjoy.