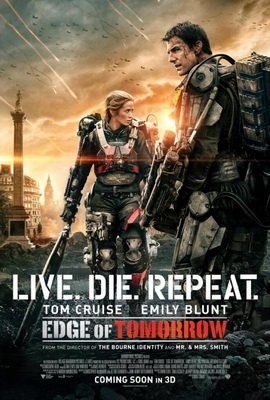 I have to tell you about this movie, it’s a breath of fresh air in a 2014 Summer of mostly dull movies. This one flies above the rest. It’s concept is not unique but if you see this movie, you’ll be talking about it for days. It’s a bit like Groundhog day in concept. By that I mean, the same way Bill Murray’s character has to keep reliving the same day over and over again until he gets it right. In this case, the conflict is fighting aliens, and scary ones at that.

We see a funny Tom Cruise for a change. I recently saw “Oblivion,” an example of his serious sci-fi side in an excellent film.

He was the rough and tough sci-fi action hero. In “Edge of Tomorrow” it’s a lot of that but with laugh-a-minute deadpan humor thrown into the mix. Much of this humor consists of Emily Blunt beating him to a pulp to train him day after repeated day: hence the title “Edge of Tomorrow.” I liked this movie for many reasons and therefore highly recommend it. I am going to try and avoid spoilers on this blog because I know a lot of people like to leave the movie a mystery as they watch it unfold. Suffice it to say, the critics of all the major movie sites say the same thing as I.

Have you seen this film? What are your thoughts?