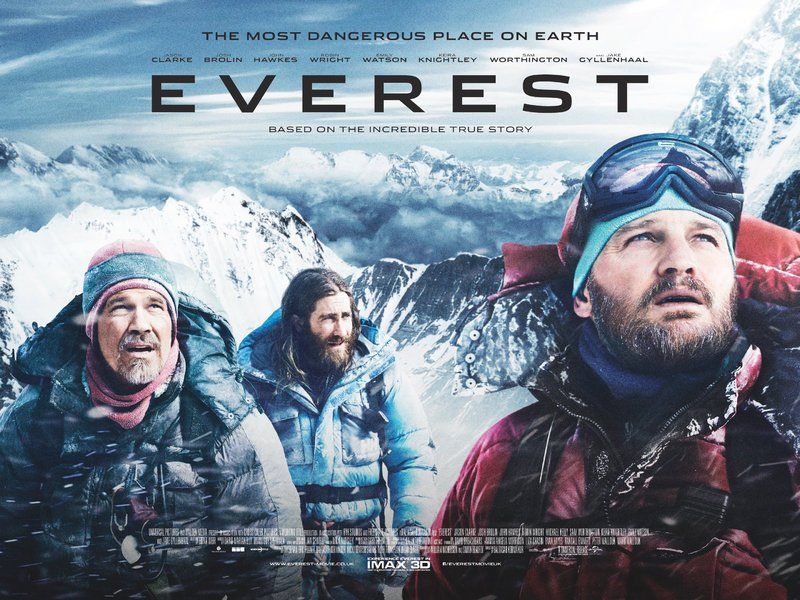 Title: Everest
Genre: Adventure, Biography, Drama
MPAA Rating: PG-13
Year: 2015
Director: Baltasar Kormákur. Known for “Contraband,” “The Deep” and others.
Top Billed Cast: Jason Clarke, known for “Zero Dark Thirty,” “Dawn of the Planet of the Apes,” Josh Brolin, a well known actor, and Thomas M. Wright, known for “The Bridge.” Note: There are many big names in this film including Keira Knightley and Jake Gyllenhaal.
Brief Synopsis: A true story makes for grand cinema as we travel with hikers up Everest and experience what they do.
My Word to the Wise: Gritty, brutal film making but for a purpose. We feel the machismo along with these men and we feel the fear of their wives as they take on this journey of false bravado. A lot of snowblind places in the script that could have been better but a grand cinematic experience.

Everest is a film with panoramic landscapes. It’s also a gripping adventure. It’s not one to be watched on a small screen. I found myself wondering why the hell they would take on this hike through the beginning parts of the movie. Later, I felt the foolish pride well up in my heart with them. At the end of the movie, it was if I was in the last paragraph of the new story with them. It’s well acted and well cast with some very famous actors like Josh Brolin. Whether you enjoy hiking or don’t, this film will bring you to a much higher place. It is difficult to watch at times when the script is thin so it lost a star with me.