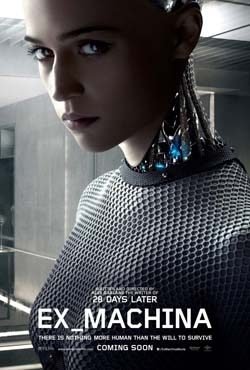 I don’t know if it is my advancing age or the inclusion of several laborious scenes set to synthesized music but I nodded off twice during the film. I did like it though, it certainly took an original spin on an age old robot theme. This film dispenses with the question of whether we can create AI. Instead it looks at what AI may think of us after having been created. Then yet another question arises: will AI agree to the station we assign it? Ex Machina is a very slow movie but it is clever and interesting if you are rested, at least I am sure it would be. It raises ethical questions about the manufacture of model-figured women who are not human but created to serve. I couldn’t help but recall the Stepford Wives.

There isn’t an original theme but the directorial choices are peppered with new stuff. The special effects are captivating. There are some jabs at Google and the collection of information. The maker says he was able to secure millions of cell phone data banks because the providers steal it and he threatened to expose them unless they shared. This was far fetched in my opinion but an interesting wake up call that Google and cell phone companies probably have far too much on us. Google execs and programmers are the new Howard Hugheses (plural sp?). In this film they are very scary, almost to smart for their own good. What’s more, they’re making female robots, often fully naked on screen, that are devoid of morals. This could be interesting for some. For laborious scenes and general lack of original theme, it lost 2 stars from me.

One Reply to “Ex Machina”