When 2 artists separated by over 30 years decide to go on the same project, touring the country seeking people to let them make murals of their faces, funny stuff happens. It’s also a touching film with depth and sadness that appears to spring up with pure spontaneity despite its profundity. 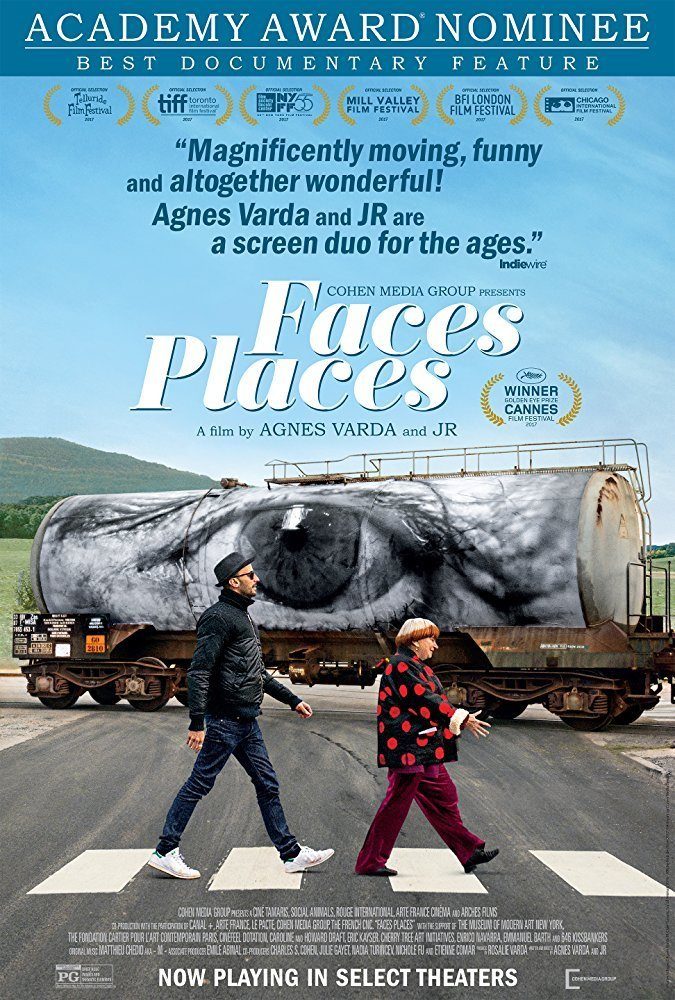 The film was written and directed by its costar duo, JR, and Agnès Varda. Both are professional artists willing to take chances with the film’s austere concept.

The first art is done on a set of town homes that have belonged to old mining families. They get permission to enlarge old photos into wallpaper posters and paste them on the houses. The people are blown away by the compliment and the woman we first meet who has lived in the houses all her life breaks out in sobs. The thankfulness of the people is truly moviing and thought-provoking to watch.

They go on several other places asking the denizens the same permissions. They also plaster photos on trains and boxcars stacked in a ship yard. The resulting effect is highly lifelike and definitely makes you look twice. I can only imagine the power these murals had on the actual local areas. There is some talk of composition in photography, especially by Varda since she has been an actress/film maker/artist for over 80 years. She gives him a lot of shit for not ever taking off his glasses (and he never does).

The film ends on a somber note when they aren’t able to meet up with her friend and colleague Jean Luc Godard. It brings the fame problem to the surface. The movie is about regular people and a famous person can’t be bothered to meet with him. Varda calls him a dirty rat. This film is a bit hard to watch but as I ave been reading lately, those can be the ones most worth getting through. It’s more of the same as far as art realizations go but it doesn’t hurt to be reminded. We are all just temporary faces on the backdrop of time. I give this film a 7/10. Charming, thoughtful, & certainly worth your time.