Asking me to rate a Harry Potter spinoff/prequel is a lot like asking a mean old man in the mid 1950’s to rate a Beatles album. To him it’s shit. To me this is shit. I was twisting and turning in my seat the entire time. I related with very little, which is an important feature for me in a film. 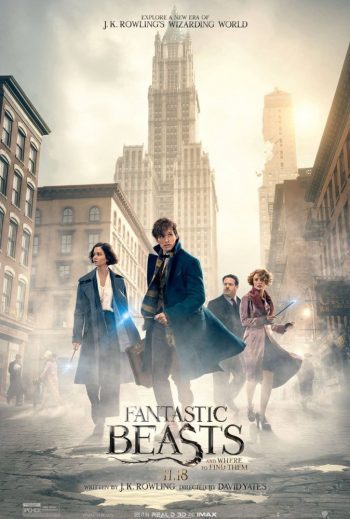 I had some interest in the Harry Potter films, emphasize SOME, but this new film has just enough in it to keep the die-hard-trekkie types reeled in. I even saw a compatriot teacher I recognized dressed in a Harry Potter hooded witch costume, replete with wand and glasses. That’s when I knew I really shouldn’t have come.

I won’t waste your time saying much about this film, I’m simply not qualified due to my lack of interest in Harry Potter films. The beasts are as cool as to be expected. J.K Rowling is a billionaire from her many Harry exploits so it stands to reason she would spare no expense in creating cool CGI beasts. The trouble is, you don’t see them much. In fact, you have to wait very long before you get to gaze upon them for any length of time. I loved some of these beasts. They should have had them gracing the screen much more than they did.

I won’t attempt to give you the story line here because it isn’t interesting and this film really didn’t resonate with me enough to care to do that. I usually give a summary, here I won’t it isn’t worth your time. I haven’t walked out of a film in several years. The last one I recall walking out on was The Passion of the Christ (2004). I’ve actually never reviewed that film and for good reason. It falls into the Mel Gibson line of beating the hell out of the protagonist. I guess I wasnt in the mood that day.

Eddie Redmayne was just ok in this. I wanted to slap him he mumbled so much. I wasn’t impressed by his wand either. Why is Ezra Miller in this? I usually like him too but all I could think about when seeing him was: “Oh crap, another big name actor that will merit making a backstory thereby making this film longer.”

The only people I can recommend this for are those with Harry Potter action figures and costumery. They are so starved for a new film, they may enjoy this one. As for me? I’m glad I walked out and went through the mall to buy my wife See’s caramels instead.

2 Replies to “Fantastic Beasts and Where to Find Them”