Something different for the girl-kicks-ass genre.

Some movies give you backstory. Others expect you to fill in the blanks of why, when, and how. The truth is, “The Final Girl” doesn’t need much backstory, it starts with the action right away. 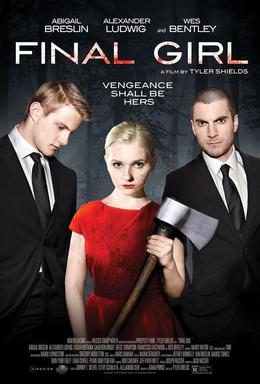 I love low budget, simple, action-filled horror films like this. The story may not be plausible but you get what they are trying to do. It’s something about vengeance and something about victory … good triumphing over evil.

Abigail Breslin has truly grown up and shows how she can act and fight in her role as Veronica. I loved her in “Signs” as a little one and more recently in “Maggie.” She played a zombie great in that. She’s one to watch! The story consists of a group of popular scumbags in high school who “hunt girls.” I mean that literally, not that they are ferociously seeking sex. A man loses his wife and daughter to them and decides to train a young girl to defeat these truly evil and disturbed young men.

Most the action is at night. It unfolds more or less as you would expect. Like a james bond movie, it’s fun to see Veronica use her techniques in the real arena. For those who dig girl-kick-ass films, this is right up your alley. I loved every minute of it. It is simple, cool, hip, a little scary, and full of vengeance. How can you NOT like a movie with all that in it? This is a perfect movie, I highly recommend it.