Flangiprop! is the term used for worldwide technology that outdoes America through creativity and innovation. It happens a lot more than you’d think. I’ve included a terrifying video of a flangiprop! invention.

In response to The Daily Post’s writing prompt: “Flangiprop!.”
Invent a definition for the word “flangiprop,” then use the word in a post. 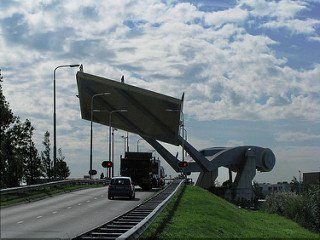 This is the famous “Flying Drawbridge” in the Netherlands. Instead of a regular drawbridge allowing the tall ships to pass down the river, a weighted arm lifts a small section of the road above the masts while cars wait at a signal for a given amount of time. When the boats pass, the chunk of street is levered down. We should be learning from Flangiprop technology. When creativity and open minds are rewarded in America, we can be coming up with marvels such as this monster street lifter. We are making strides in some areas but America is not where it could be in competition with flangiprop worldwide. Make it a game, make it a directive, but make it better than the flangiprops out there. Here’s a video to terrify your day.