Creepy performance by Steve Carrell. This is also a very creepy TRUE story that only features wrestling as a theme. There is a LOT more going on here. 8.5/10 I say that because I avoided it for many moons since I don’t dig wrestling much. A must for Steve Carrell fans as well as fans of dark stories. It was annoying at times because I don’t understand nationalistic sport bullshit but the story was adapted well. Rent in SD $2.99 on Prime Video. 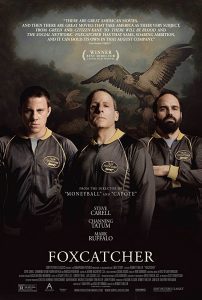