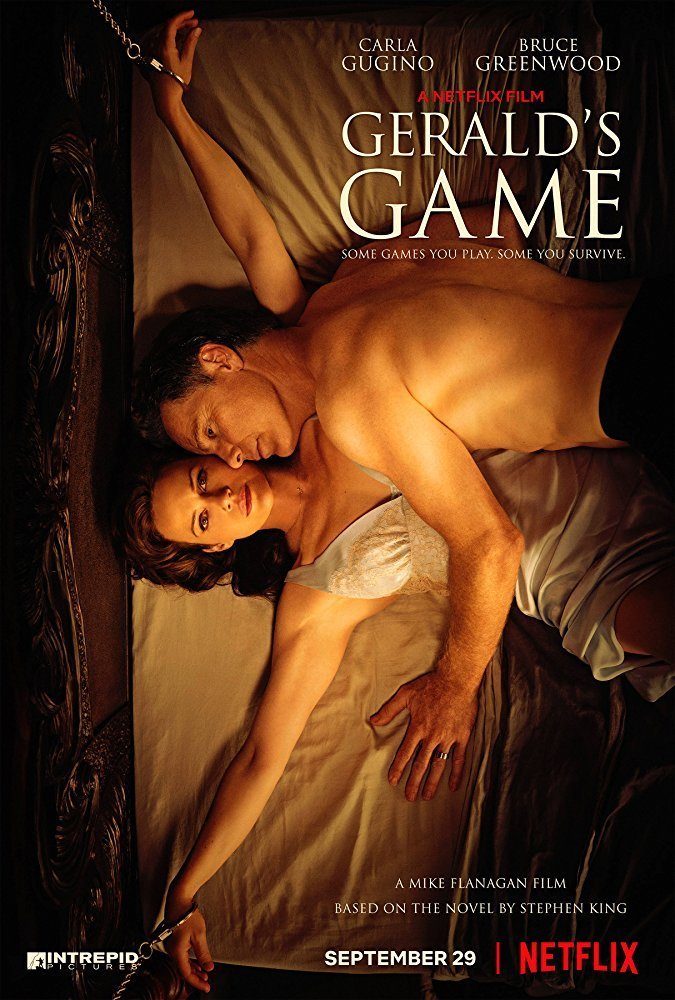 While trying to spice up their marriage in their remote lake house, Jessie must fight to survive when her husband dies unexpectedly, leaving her handcuffed to their bed frame.
Director: Mike Flanagan
Writers: Stephen King (based on the novel by), Jeff Howard | 1 more credit »
Stars: Carla Gugino, Henry Thomas, Bruce Greenwood

Mike Flanagan has proven himself a strong thriller and horror movie director. His early strong work was Hush and most recently, he wowed horror audiences again with Ouija: Origin of Evil. This Netflix movie follows suit, he has done an amazing thing here.

Flanagan too a Stephen King novel and created this horror film. I can call it horror even though horror aspects don’t show up for quite a while in the movie. You may question it yourself but trust me, when you watch it, it will be revealed.

The acting is top notch. You have Carla Gugino as the wife inadvertently drawn into a “Fifty Shades of Grey” sort of game. She is the star of this film. Her acting is 100% from the gut and I believed in this character because of her. At times it was like Cast Away, a woman trying to survive all by herself. At other times, she was a tortured child working through her demons. And then there’s the dark character that keeps showing up. You just get a feeling he is going to have a greater part in the big picture. Bruce Greenwood is her asshole husband although we aren’t clear on just how much of an asshole he is because most of his parts are created in his wife’s mind.

The final 1/4 of the film is the best part. All is revealed and a lot of your frustration as a confused viewer is assuaged. The final scene feels so much like a Stephen King movie I just can’t explain how much. It works on many levels. You may get bored at first but persistent audiences will be rewarded. It should have moved a bit faster though in my opinion.