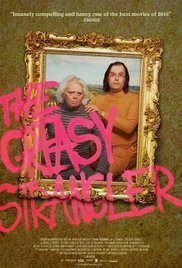 Ronnie runs a Disco walking tour with his son, Brayden. When a sexy woman takes the tour, it begins a competition between father and son for her love. It also signals the arrival of an oily strangler who stalks the streets at night.
Director: Jim Hosking
Writers: Toby Harvard, Jim Hosking
Stars: Michael St. Michaels, Sky Elobar, Elizabeth De Razzo

Every thing director Jim Hosking makes is odd, but then, that’s the intent. Some directors are thought odd for simply making their movie. With Hosking, he has a history of winning British awards for being odd and yes, he does it well here.

Actors Michael St. Michaels, Sky Elobar, and Elizabeth De Razzo really own this film. Their interplay gives the film it’s ambiance and tone. The father is just a complete psycho and not be trusted. The son is a meek but probably equal oddball and the “girlfriend” is innocent definitely a top notch actress to pull this tweaked and weird role off.

You will see farts and cussing and downright disgusting images. You’ll see male frontal nudity … a lot of it. As the father and son work at their disco tour business, you’ll feel like you are part of it all. As for the overall message, I didn’t get it. For me, there should be at least something to hold onto and takeaway. Since that was absent, the weirdness has no purpose, It was like Nacho Libre but Nacho had a message: believe in yourself. This one is probably: don’t be afraid to move out when your 50+. In conclusion: this is something very different if you’re in the mood for a laugh at some really raunchy stuff.