There is now another “root for the underdog” fighting film to add to the movie archives. It’s also another try at a “feel good education” film. The Kevin James movie I’m referring to Here Comes the Boom was directed by Frank Coraci, known for other Happy Madison movies like Click and Zookeeper. It’s received a slough of low ratings due to its failed jokes and recycled conventions. Those are valid criticisms but it’s redeemed by its Rocky spirit and good message for teachers to inspire their students. It is decidedly not a Stand and Deliver or Lean on Me … but it does promote inspiration which makes it worth seeing. 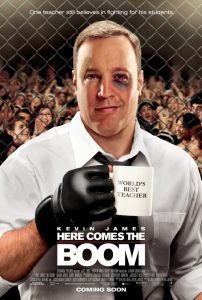 IMDB summarizes the film as follows: A high school biology teacher looks to become a successful mixed-martial arts fighter in an effort to raise money to prevent extra-curricular activities from being axed at his cash-strapped school.

As a public school teacher I found many flaws in the way the teacher interacts with the Principal as well as his colleagues. In fact, I criticized most of the way he is portrayed early on. Nonetheless, when he started his UFC fighting, I forgot about all that and enjoyed the ride. I only wish it could have began sooner.

Listen, Kevin James is a smart actor. His King of Queens show is up there with Seinfeld in reruns and syndication. I love it. At this point his career, he wouldn’t willingly release a dud. Even though most the reviewers treat it as such, Here Comes the Boom is quality entertainment with a top notch tip for all teachers.

In the final scenes of the movie, the true purpose of education is revealed: to inspire. There are no standardized test scores reported but we feel inspiration that spreads throughout the student body. It may not portray what’s real about schools today but it reminds us of what teachers should do for their students. For the fight scenes and the inspiring message, it scored stars with me. Unfortunately, the lack of good jokes, a slow beginning, and unrealistic portrayal of a teacher caused it to lose points.