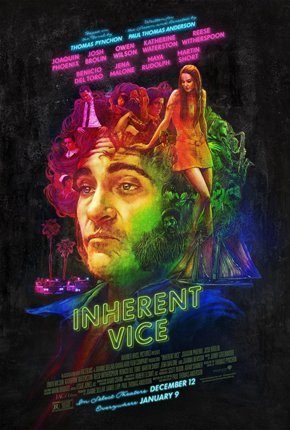 Title: Inherent Vice
Genre: Comedy, Crime, Drama
MPAA Rating: R
Year: 2014
Director: Paul Thomas Anderson, “Boogie Nights,” “The Master” …
Top Billed Cast: Joaquin Phoenix, Josh Brolin, Owen Wilson, Katherine Waterston, Reese Witherspoon, Benicio del Toro …
Brief Synopsis: Los Angeles in the 1970’s was a place where many lived double lives. This film follows a hippie PI through some of that as he uncovers more secrets than he bargained for.
My Word to the Wise: The cast and acting is amazing. I’m not too crazy about the story. To follow it you need x-ray focused attention and even then it’s hard to follow. I didn’t feel the payoff was worth the wait. That subtracted two stars for me.

Best scene by far is when Brolin is transporting Phoenix to the station while making oral love to a frozen banana. There are some great dramatic scenes by Brolin as well. Phoenix does a good job. I liked him better in this with disheveled hair and huge sideburns than his clean-shaving character in “The Master,” also directed by Paul Thomas Anderson. You might say he has a face for a beard. I have a feeling the story as laid out in the book is much better than the convoluted presentation in the movie.