“He WAS your friend, NOW he’s a doorstop.”

Fans of “Panic Room” may really like this one. A group of under thirtysomething males break into the protagonist’s home on a tip there is cash there. She surprises them and delivers some top-shelf girl kickass. 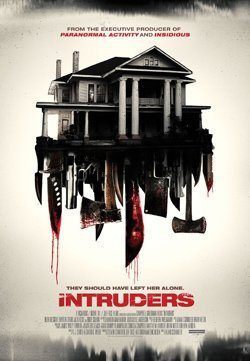 This is a girl kicks ass movie but there’s is another element. Madness keeps her in the house where she has remained ever “since daddy died” which we are given no exact time on. She nursed her cancer stricken adult brother in the house for years until he died and then even at his funeral she still will not leave the house. So, her madness is an extra element not always seen in “girl kickass” movies.

Beth Riesgraf plays Anna Rook, the heroine/protagonist. She is well known for her role on “Leverage” which I must admit, I now want to see more of. She’s very talent with a ton of potential. This is an excellent revenge type role but it wasn’t received well by the critics. I hope Beth Riesgraf gets roles that get her more exposure, she’s very talented. By the way, if you remember Rory Culkin from “Signs” as a child actor, he reappears in this film as the delivery guy. Buy, his look has changed.

I’d say this film is mostly a thriller and less horror that the posters promote it as. We do find out some horror elements exist like the frozen hand in the freezer and the makeshift dungeon in the basement. Still, this is a thriller with a fairly decent script that holds the viewer’s attention. It has a strong concluding scene that I fond very creative. Overall, I highly recommend it. As is my common theme lately in my reviews, you can’t always trust Rotten Tomatoes. This is a creative and fun thriller with an added mental illness factor. It spent a little too much time developing the relationship with her dying brother and I found that cumbersome. Still, I enjoyed it and highly recommend it. Now I’m off to watch “leverage.”