Roger Ebert wrote in his review that most viewers would find this film unwatchable. I agree with him. I hung in there to the end. It’s pure chaos until the most graphic rape scene I’ve ever seen. Is that the best place to find clarity? 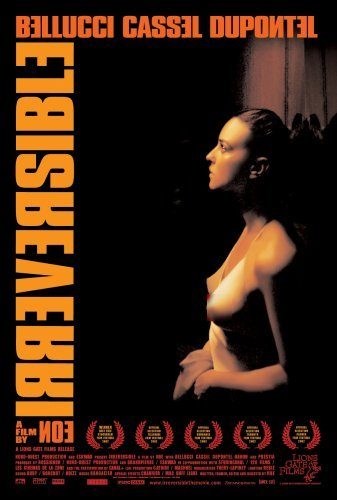 Events over the course of one traumatic night in Paris unfold in reverse-chronological order as the beautiful Alex is brutally raped and beaten by a stranger in the underpass.
Director: Gaspar Noé
Writer: Gaspar Noé
Stars: Monica Bellucci, Vincent Cassel, Albert Dupontel

Gaspar Noé, our director here, has done something cool with the film structure. Everything else about the film feels like torture. I won’t tell you the sordid details, those who are curious will find the film and check it out. It is currently streaming on Amazon Prime. Besides the gut wrenching rape scene, there is an equally disturbing segment in a gay bar of a man bludgeoning another mans face to a pulp. It looks so lifelike I am curious how they did it. In a twisted sense, it is a sort of accomplishment. The director shows you scenes in reverse order. In other words, if someone dies, you will see them later. It’s a bit confusing but some people who like figuring out puzzles may life the effect. For me, this film left me empty. I didn’t think it was a marvel of a film as some critics say. I don’t think you should see it since there are at least 2 things you cannot unsee. It is clever in technique and structure but that’s not enough for why I go to the movies. 4/10.