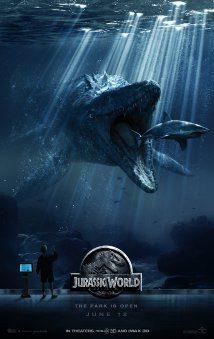 Fans of the original Jurassic Park are likely to love this one. There isn’t much new in the way of a twist though. I remember the build up back when the first came out, people came out to the movie in droves. It really was like waiting in line for a ride. It was an original idea my Michael Crichton and everyone wanted to see the giant lizards. It was basically three things that made that movie popular: 1) The dinosaurs, 2) The action, and 3) the story. On all three levels I still give the first one a 5/5. This new one is good, very good. It is a rollicking rode for sure and worth the price of a ticket. At the same time it really lacks in the story department. I went in hoping to get something new and fresh that made me think about dinosaurs. In between the guttural dinosaur special effects, it just isn’t there.

Having said that, I doubt moviegoers really care about that. The dinosaurs and there, in full tech regalia. I’ve always thought dinosaurs were cool. I like to watch them but in real life they aren’t there. I even think museum bones are a bit boring now thanks to this franchise. I felt the need to explain to my 8 year old that dinosaurs were extinct. It seems kids in the past 20 years have seen them so much on the silver screen, they seem real. I loved the movie, I offer no spoilers except to say you’re gonna love the dinosaurs and the action. Some stories don’t need to be improved upon, maybe that’s what the makers of this Jurassic Park were thinking.

One Reply to “Jurassic World”