The 80’s has some simple movies that made for some really good memories. This horror film is like that only it’s more like a Pee Wee Herman film than a Back to the Future. 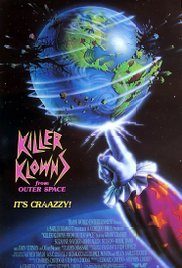 “Aliens who look like clowns come from outer space and terrorize a small town.” -IMDB

The effects are just silly. Still, they had a particular charm and allure to them. Through a random series of events, we find out that clowns have laded from outer space and they are looking to recolonize their planet by placing people into cotton candy cocoons. You shuld be in a weird mood before you watch this film. It’s not a traditional horror. Rather, it’s more goofy, silly, twisted humor.

FINAL THOUGHTS
I have to be careful recommending this film because it’s not a traditional horror. The clowns indeed kill people but they are so goofy in the things they do, they’re not scary in the slightest. I understand this film has made money off of action figures and other movie related products. It didn’t do well at the box office. Sine 1988 when it was made it has gathered a following of cult-like movie people, If you have a goofy sense of humor, check this film out and then leave me your thoughts in a comment. I would love to start a dialog about this film.