“You better watch out.”

A lot of kids beg their parents to watch horror. You can’t protect your kids from everything. I’d say let your guard down with this one. It received a pg-13 rating but I think kids 10 and up (who are over the Santa Claus thing, otherwise there may be all sorts of confusion) will have a rock and rolling time. 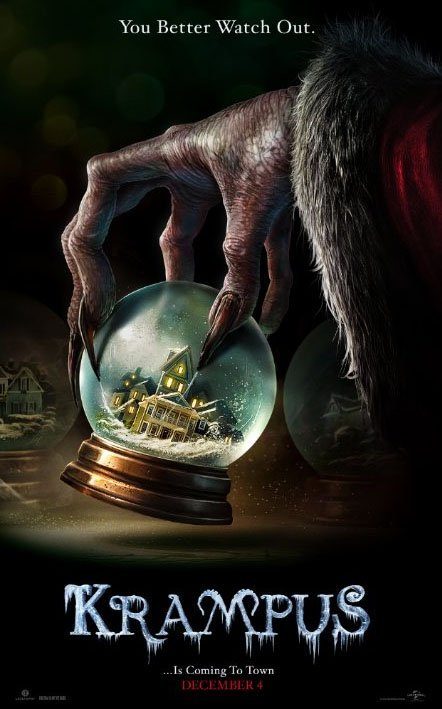 There are some really scary scenes but if you talk about it with your kids, they should get a kick out of it. “Krampus” is also a film for grownups. Fans of straight up horror may be put off by the juxtaposition of comedy, but for those wanting something sarcastic and quite different in horror, this is a good one to see.

Rotten Tomatoes didn’t like this film much. What that means s, a compendium of critics’ ratings averaged out below 67%. That almost kept me away from this film. I’m glad I persisted and saw it, despite the critics. It was a lot of fun!

I wouldn’t call this film horror. It could better be described as a Christmas comedy like “Home Alone” with horror conventions. If that sounds good to you, you have to go see this film. It starts out with all the trappings of a John Hughes film and then busts out with amoral killing, blood, guts, and even a doll that resemble sthe one from “Saw.”

The Krampus christmas devil is not new. From what I can gather, the mythology has been around for centuries. Apparently the Christmas devil will come visit you if you renounce Christmas and good will toward men. I think it’s hilarious how they took this story and made it into an instant Christmas classic. I’m a teacher of 28 ten year olds and I asked for a show of hands yesterday of how many kids had seen “Krampus.” The tally was: 28/28. Sometime old fogies on Rotten Tomatoes measure a film by tradition values and trends. One shouldn’t do that with Krampus. It will be on my Christmas viewing list for sure along with “A Christmas Story,” “Nacho Libre,” “A Miracle of 34th Street,” and “A Christmas Carol.”

As an aside, I’ll be pulling back from using Rotten Tomatoes as a first line impression of movies I am curious about. I think what’s happening is a lot of movies are not me seen by yours truly due to a low score with the critics. Sure, you take a chance not reading a rating for a movie but at the same time, that rating can act as a sort of brainwashing, a muddying of the waters that are your views about the movies. I’ve loved RT for years and I still do in a way but my usage is now going to be far less. Now, go rent Krampus and have some scary laughs >:) I gave it 5/5 stars because it is exactly what it advertises to be and I love movies that are true to themselves that way.

One Reply to “Krampus”