This is an older review I’m reposting in light of DC’s Wonder Woman doing so well. I plan to review it soon. Man of Steel didnt impress me much. 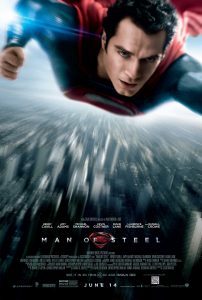 Zack Snyder directed Man of Steel. He’s known for directing films like Sucker Punch, 300, and some others. Amy Adams was his choice for Lois Lane, Henry Cavill: Clark Kent, Diane Lane as Clark Kent’s mother, and Kevin Costner as his earthly father. It is a relatively star studded cast worth reading from a list if one has the time.

I will say that I think there are far too many movies out there depicting the White House being destroyed. It’s not that I am overly patriotic but I think the movie makers do it simply for shock value. This movie doesn’t attack the White House but there is that same unorthodox violence being done. I really felt at times I was experiencing the destruction of the twin towers at 911. Those were the violent times. When this film started out it was endearing. I leaned over to my wife and told her they were getting it right. There is one scene where Clark saves the school bus that has plowed off a bridge. That was awesome and made me want to learn more about this Clark Kent! Unfortunately the long segments of gratuitous destruction and violence (reminiscent of White House destruction) are so boring and off-putting I contemplated walking out. If it weren’t for my wife who never walks out, I would have.

There are three parts to this film: escape from Krypton, Clark growing up, and the longest part: when the Krypton people arrive and destroy earth (almost). When the destruction segments begin, the movie is nothing more than GI Joe. I have noticed the movie public is paying to see these sorts of military films so I won’t slam them too hard. As for me, I am really not into the Army commercial type movies. I know some of my friends are so I won’t get judgmental here. I would hate to alienate friends and the movie going audience. This opening weekend it is doing way better than expected. I could be wrong but I sensed a right wing, religious agenda as well. There were many places I saw this but one example was when Faora, one of the Kryptons, said something to effect of they will win because they represent the strongest of evolution and “evolution always wins.” After that Superman is able to destroy her mask and kill her. There are other places I could use as support: for example Clark Kent says he’s just a guy from Kansas and yet he is not human and ready to lay down his life for all humans. Just a thought, feel free to dismiss it.

One thing that is sure about this movie is the destruction. It lacks the love story, humor, and humanity of previous Supermans. I thought I was going to love it and they explained the origin of baby Superman well. Unfortunately, when the destroyers come in, it’s just another overly patriotic (sappy) Independence Day/GI Joe formula. I wanted a modern telling of Superman but it was a bait and switch.

2 Replies to “Man of Steel”