Is what you see what you get? Marjorie is in dementia stages of her life and her family allows her a robotic hologram in the shape of her deceased husband, in his younger years. Is this good therapy or just a good babysitter? Moreover, will it bring her the comfort they want it to? 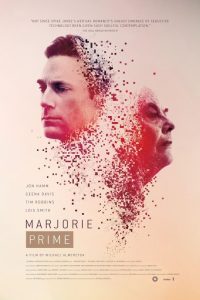 A service that provides holographic recreations of deceased loved ones allows a woman to come face-to-face with the younger version of her late husband.
Director: Michael Almereyda
Writers: Michael Almereyda (written for the screen by), Jordan Harrison (based on the play by)
Stars: Stephanie Andujar, Hana Colley, Geena Davis

The director, Michael Almereyda, went to Harvard. Besides that, he made a film adaptation of Hamlet (2000). It was shot on Super 16mm and featured Ethan Hawke, Bill Murray, Kyle MacLachlan, Julia Stiles, Liev Schreiber and Sam Shepard. The adaptation layered a contemporary New York setting on Shakespeare’s text. Almereyda has won several persitigious awards: Guggenheim Fellowship for Creative Arts, US & Canada, National Society of Film Critics Special Citation. Though most his films haven’t been popular hits, he has a respectable knowledge of his craft.

Geena Davis and Jon Hamm give standout performances. We learn things are one way at the beginning, and believe it and then as the film develops, new realities surface. There are statements here about dementia and memory. Furthermore, there is some about suicide. It’s an excellent film for thinking about these things. Definitely a sci-fi film more than a drama. To understand the message, it helps to see the sci-fi side of it. It’s a slow burn and that may turn off some viewers. I give it a 6/10.