Zombies walk and they are dead. Glen? He doesn’t walk now he has sex and kills similarly as a result of a virus. 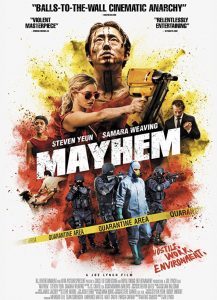 When you’ve had a gig as long as Steven Yeun did on The Walking Dead, it’s anybody’s guess what your next project will be. I suppose a film like “The Belko Experiment” where employees go berzerk and massacre each other would be fitting. Well it is and that’s exactly what he stars in and produces with “Mayhem.” Unlike “Walking …” There’s saucy sex involved. Other than that it’s the same because there’s a virus that causes mayhem and killing at a frantic pace.

I thought this movie could have gone a few different ways than it did. Most notably the sex scenes were a bit silly in my point of view. If you liked “The Belko Experiment” you may like this one. It’s that bust with a bit of higher octane. The director Joe Lynch shows great promise based on his IMDB bio. At present, it’s scoring well with the mainstream critics. His latest project “Everly” starring Salma Hayek is now streaming on Netflix. Watch for my open-minded review of that soon. 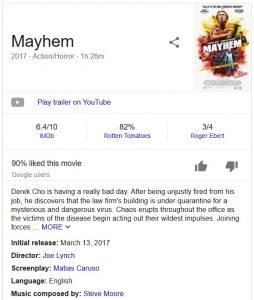