I must admit I went looking through the films of Lars von Trier in anticipation of “The House The Jack Built,” a serial killer themed film. It should be coming out in 2018 and I am somewhat on the edge of my seat. I think Matt Dillon is a great choice for a killer. “Melancholia” came up in a search and I was eager to watch it a second time. It had been several years since I watched it, around 2012 or so. It is one of those odd, open to interpretation films like “Birdman” that I love so much. 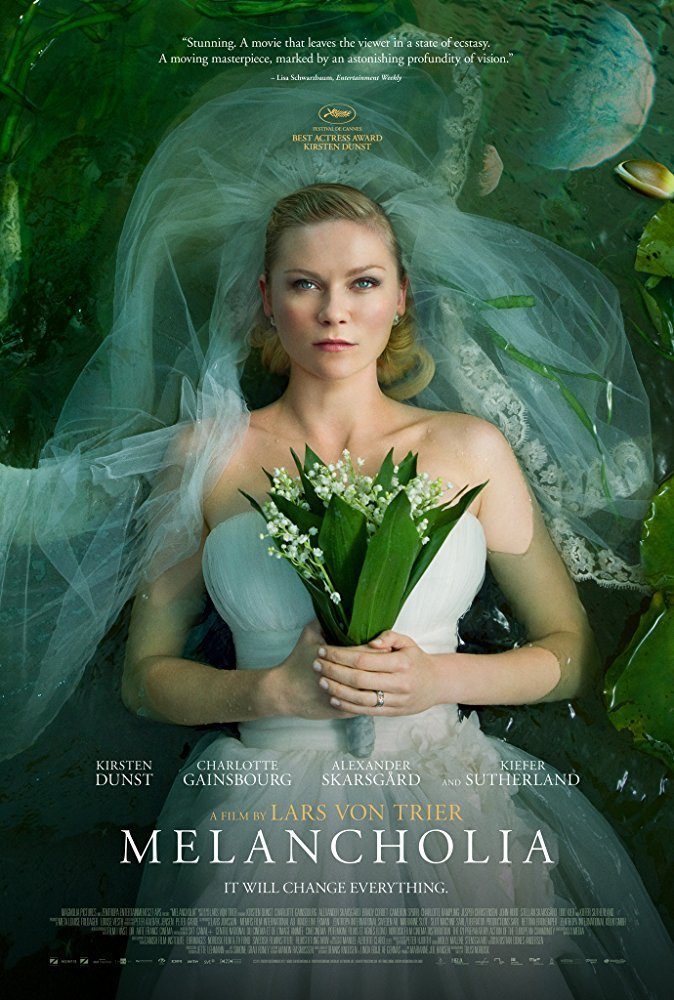 Lars von Trier is a compelling director. He has the amazing sounding serial killer film coming out but he’s already made a name for himself with so many excellent, albeit misunderstood by the masses, films. I like him because he is against the grain in filmmaking. He gets an idea based on his urge to convey it not his desire to make money. Ironically, his films do make money. This is one he may have a message intended for but I must admit, I didn’t try to exactly define it. Instead, I did what I always do with films like this: I let myself come up with what it means TO ME. Thank you Lars von Trier for creating a movie I can enjoy and interpret the way I want to.

There is such a cast of famous and talented actors, for brevity’s sake I hesitate to mention each one. The main three are Kirsten Dunst, Charlotte Gainsbourg, Kiefer Sutherland. Sutherland stands out in his performance as a controlling coward of a man who is not at ease with himself or other people. I find it odd how a man can pay for his sister-in-law’s wedding and when it doesn’t go right, just keep reminding her of the amount he spent.

The sister of the protagonist is Claire. She is the one who takes on all the anxiety of the family, It could be argued she is the strongest “sane” person in the bunch. And then there is Kirsten Dunst’s character. She appears to be mentally ill with depression (Melancholia). At the same time, she has a closeness with this planet that is supposed to spell everyone’s impending doom.

This is the sort of film you really need patience with. A bottle of wine, a special coffee concoction (my choice) and any creature comforts you can summon are in order. I feel she is one with the depression planet and as it is crashing in, she is calm since she is crashing on everyone else already. There is also the message of how life is short and can end abruptly. Therefore, marry only who you truly love and do that which you find utterly satisfying in your time on Earth. I recommend this film if you can handle all that. I give it a 9/10.