This minions is great as usual for its jokes and slapstick comedy with the world’s funniest tube-like creatures since the Weebles. It’s visually amazing, which one would expect from Illumination pictures but lacks a good story akin to the first Despicable Me film in the series. 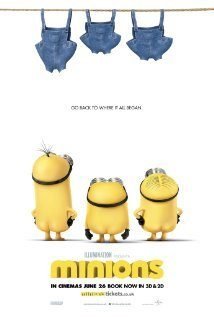 Many will argue that a good story doesn’t matter for the Minions to be entertaining. This is mostly true. Perhaps it’s because the film came out running neck and neck with amazing storied films like Inside Out and Home. I wanted to get into the story at least a little bit. I really had no interest in the story of the Minions. It has many holes in it and so much is left unexplained. For example, how long do they live and are these the same ones we see with Gru that are with the T-Rex?

The film works as a set of short films, if taken that way. I think it would have been better to leave out the history and the evil villainess played by Sandra Bullock. Watching the little guys hit and slap each other is fun without any need for an underlying story. The one provided is so fragmented and under-developed, it’s hard to stay focused on the proven comedy of the Minions.

I wanted to say I liked this film more than all the reviewers saying it’s awful. I can’t really recommend it as amazing. This, the slapstick stuff everyone loved is there even in the absence of a decent story. Hopefully animation movie makers will try and get a powerful story along with stunning visuals. They go hand in hand for truly great films.