This review contains spoilers. The stages of life, from kindergarten to ones senior year of high school, are fairly predictable. This is often more true of heterosexuals only I’m afraid. Gays still have a much tougher time growing up and understanding their sexuality. This film examines the stages of one gay man, a black man who must discover who he is with very little assistance. 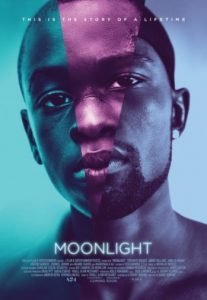 I love films that employ the use of several actors to portray a person through life. This is one of those. There were times it felt so real, like I was there watching the schoolyard fights, and other time I felt so much empathy for the protagonist I fought back tears. My wife was not as successful in that regard.

This is an incredibly moving film.

It’s the story of a black boy who grows up in urban poverty. He’s bullied for being different, and his own mother who is a drug addict calls him “faggot.” It seems the only role model he has is the street drug dealer in his neighborhood.

We see him dealing with so much adversity and trauma. Interwoven throughout are his feelings for other boys. He gets a chance to explore them once but never again until much later after he has spent time in jail and “rebuilt himself from the ground up.”

There’s nothing flashy here, no gratuitous sex or violence. This is the life of an American black man who learns to adjust in his world while being gay. This is one to talk about for sure. More films like this are necessary. I recommend this film highly to those who identify with and/or support the LGBT lifestyle. Also anyone who has a heart for those who are different from the elusive societal “norms.” The characters are like family. When you see them on the street corner or in their apartments you don’t just see them, you are invited in by their performances.

As a white, heterosexual male, I found this film stunningly beautiful, an amazing triumph in film on a topic that we need more films about.

One Reply to “Moonlight”