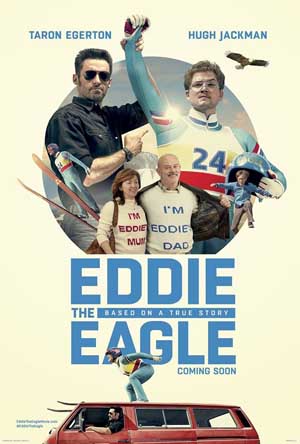 This is the “based on a true story” film adaptation of the olympian Eddie Edwards. It’s special because he fights harder than any other athletes to achieve his goal. The other reason it’s noteworthy is because no skier from England had ever up to that point competed in his chosen competition: long distance ski jumping.

Taron Egerton does a great job as the eccentric Eddie. He seems to get his determination to win an olympic medal early on in life. Hugh Jackman plays his washed up coach trying for redemption. As it turned out, he did not train for the ski jumping competition. Rather he just looked at something he was interested in that he felt he had a chance of winning at and got right to work. It’s an inspiring small town hero story as much as a comedy. Parts of it reminded me of Rudy, another based on truth story film about a short and underweight football player for Notre Dame. You definitely get a load of inspiration from Eddie.

What the film creates in optimism and inspiration it loses in a poor script and very predictable turns. As I watched I felt let down a few times because I really wanted to see the film get serious and show what the olympics are. The film will not disappoint the younger viewers though. I would say kids who are interested in sports ages 0-13 may appreciate the humor and feel the inspiring moments. As for me, it fell flat and lost points for making Eddie look stupid all the time. There must have been a serious athlete in there at some point to do what he did. The Eddie portrayed is more a goofball than anything so that’s where it lost points with me. But that doesn’t make it a “bad” movie. This might be a good DVD or VOD to get with the kids to assuage the butterflies in the stomachs before a first soccer game or the like.

3 Replies to “‘Eddie the Eagle’ – Inspiring Jumps Despite Predictable Turns”