This movie is a blueprint for letting go of a failed marriage, embracing change when you feel too old, and being unselfish through divorce for the sake of your child. Believe it or not, there is a lot of joy in Alex of Venice. 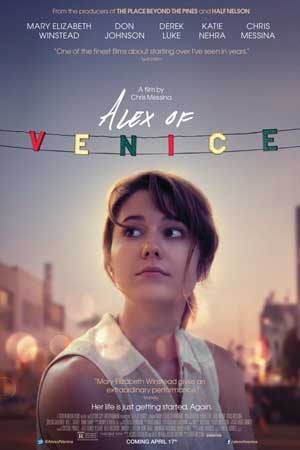 I’ve been crossing paths with people who got married before age twenty and thinking they all must be crazy. I changed so much in my twenties. For me, it was necessary to “find myself” through my twenties to have the marriage I enjoy now. I got married at 33.

Chris Messina (Devil) directed this film that shows the sudden jolt that occurs when one who married young realizes she’s with the wrong person. What does one do in such a situation? Alex in Venice shows us how one woman deals with it.

Alex (Mary Elizabeth Winstead) is a workaholic attorney who clearly hasn’t analyzed her life enough. Her marriage is all but lifeless. Her husband George (Chris Messina) is the one who takes the drastic step of moving out. Actually, he doesn’t just move out, he flees. Alex is forced to grapple with taking care of her father (Don Johnson) and son alone. It has the potential to break her but as we see, she becomes stronger. Winstead has alluring eyes that brighten up any film she’s in (10 Cloverfield Lane, Swiss Army Man). She does a great job playing this role, its believable what she’s going through. She encounters casual sex (only one time), the ecstasy drug (yep she goes there), and partying in hopes of discovering the self she could have been and in fact now is. It’s all done with mixed success. In the end she becomes stronger, and this type of separation could make one weak.

In the final scenes, Alex and George show in their tender conversation with their son that they are indeed divorcing but that they both pledge to be there for him in the strongest love they can. It’s a tear-jerker scene but also inspiring in that it shows the strength people can have, along with maturity, when a marriage just doesn’t work out. Society judges enough without judgement in books and movies. This movies gives an image like a lighthouse of the way it can be when both people put their egos aside, admit it’s a dead marriage and then work toward a good divorce. It’s not a “feel good” movie but I found inspiration for the times in life you have to let go and walk forward with courage. This film achieved what it set out to do, I give it a 5/5.