The story of Eric Liddell is an inspirational one. The music by Vangelis in this film works to elevate the audience to a higher place than most of us usually experience. After all, not all of us will run in the Olympics. The evocative message in Chariots of Fire is strong and timeless. 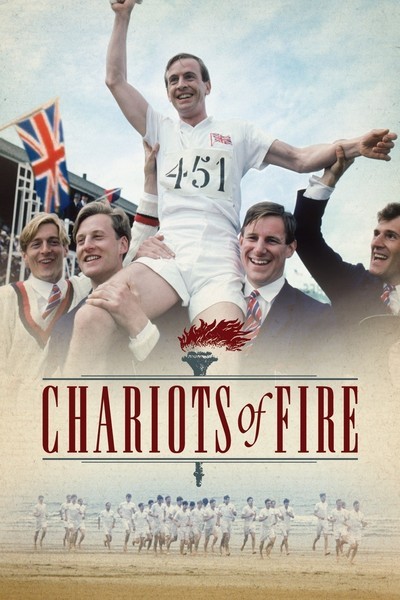 There was a poster in my running coach’s office when I was in High School that read: “The agony for the ecstasy.” That is why serious runners do it. I didn’t run anymore but in my twenties I knew the ecstasy of it. Chariots of Fire displays it masterfully. The film’s true story and anthemic music touched a generation beginning at its 1981 release.

Harold Abrahams (Ben Cross) is the protagonist and he wants to win the olympic medal at any cost. He’s also a student at Harvard who is obsessed with running to run, second place is not good enough. As the Olympics near, he hears of another runner, Eric Liddell (Ian Charleson) vying to run in the Olympics. The difference with Eric is that he has a natural ability to run. Abrahams needs a coach and all manner of training to have a chance at winning. Liddell is also a Christian with high ideals. When he finds out the qualifying races are on a Sunday, he tells the committee he cannot run due to his Sabbath. This is the first time something like this ever happened to the committee so they hardly know what to do. Ultimately, they put Liddell in a different race category so he doesn’t have to run on Sunday. At the same time, Abrahams becomes tortured because he will never be able to prove himself against Liddell. This eats him up inside.

The film is a psychological study of Abrahams. He is a “win at all costs” scrupulous fellow. Conversely, Liddell is a contented missionary in China doing the “work of the Lord” with his sister Jennie (Cheryl Campbell). 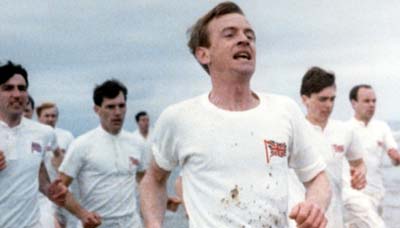 There are two speeches by Liddell: one sounds like a sermon and another like a funeral. In fact, the final speech is drawn from actual lines Eric spoke at Abrahams funeral in real life. While they were adversaries on the track, they did become friends. What’s the one thing you won’t do? If you can’t think of anything, you probably need to work on your integrity. Liddell’s live mat seem like a stoic life of service. Abrahams life may look more indulgence with a girlfriend, wine, and the finest of food while studying at the finest of universities. The irony is that Abrahams is always unsatisfied. He becomes jealous of Liddlell, not because he is a better runner which he is but rather because he is content and joyful. It tears Abrahams up that he himself lacks that calmness and self-acceptance.

The music by Vangelis is some of the most evocative and beautiful pop piano ever recorded. It has a synth drum sound which was only just beginning to be used in music. A combination of some ethereal sounds, the synth drum, and the analog piano made this music infectious. It showed up on the pop charts. As a personal anecdote, I was 11 years old when I saw this in the theater. My parents remained through the credits, an action they had never done up to that point and still haven’t since, just to soak in the incredible song.

This is a British film for sure. Settings include London, Harvard, and a Scottish beach where the British Track Team runs. The beach run is one of the most iconic scenes in movie history. Whether a person runs or not, this film applies to all of us. We see Liddell’s idealism contrasted against Abraham’s determination and grit. There is some of both in all of us. The question to talk about over coffee at the end is: “What would I stand up for?” The second question: “Who am I more like: Abrahams or Liddell?” They are the two poles on the spectrum. It’s a very tough question to answer. I think it’s clear Liddell is happier but I’ll leave that up to the viewer.

There is a scene at the beginning that has all the members of the British Olympic Track Team playing a game of cricket. Everyone fits except Liddell. He is off to the side and he seems out-of-place. As a missionary, I imagine he felt out of place with those guys. He says “When I run, I feel [God’s] pleasure. His character makes it a very spiritual film. Sadly, Ian Charleson died of Aids in 1990. He is also known for his roles in Ghandi and Tarzan, the Legend of Greystoke. His role as Eric Liddell remains his most popular role. The fact that he was probably not a Christian, though I don’t know if he was or not, goes to show what a great job of acting he did in Chariots of Fire. In a world where ideals seem less and less important, Eric Liddell’s life stands as a beacon of what integrity and sacrifice means. I’ve seen this film 50 times or more. I watched it again today to write this review. It’s one of the best movies ever made in my opinion. I recommend it to you.