ET might as well be subtitled ‘A Gen-X childhood.’ Those of us who were around age 10 in 1980 received this film that was aimed right where we live. 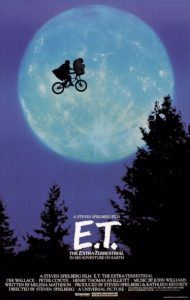 Suburbs had been a thing in the 60’s and 70’s but they were blooming all over the American map in the 80’s. ET isn’t the only film from that decade that features them prominently. They are still very much with us today but there was rarely a time when new suburban plots and neighborhoods reminded so many people in America of home. The alien named ET is the interloper who walks across the suburban threshold and gives us an accounting of what we’ve done and where we’re headed. There is also a part of ET that will always appeal to any child. He is the little green man with magical powers that all the kids want face time with. He’s the pet on the street that every kids wants until the next cute one comes along.

ET came on the heels of Star Wars and Close Encounters of the Third Kind. I remember seeing ads, on paper, that described what the film was going to be about. It explained the meaning of the term ET “Extra Terrestrial.” A creature from a place other than Earth. There was no photo but I think his green finger was pointing. This built incredible suspense or me at that age about a mysterious creature that Steven Spielberg was going to show us.

When the film starts out, we are in a tract home kitchen. There are Mexican designs like stucco visible but it might as well be a cookie cutter copy of what most American kids recognized as home. The kids are playing a board game and a single mother is supplying them with munchies, a pizza is on the way. This could not be more Americana, to me anyway. What makes it even more close to home for me is the way the mother (Dee Wallace) is a real estate agent. My dad was a real estate agent most of my young life in an Orange County city called “Mission Viejo.” It looks almost identical to the town in this film.

There is a little sister Gertie (Drew Barrymore) and an older brother Mike. Elliot is the middle child who makes the strongest connection with the alien. One night, after being left behind by his ship, ET is discovered by Elliot and that’s where the meter play begins. We get an other-worldly look at ourselves as earthlings through the eyes of this alien called ET.

Spielberg has been making movies that do this for decades. If you recall Back to the Future and the way it took us on a ride back to our childhoods to observe the choices the characters made and how they affected their future. Wouldn’t it be grand to go back and change things? I think it’s a very human thing to wonder that and therefore Spielberg’s film appeals to many. ET has a conflict with grow ups (who might report him to the authorities) and the government, NASA to be specific. In the film, I think Spielberg is showing us about ourselves and the way we want to conquer and own something alien rather than respect and learn from it.

There’s a hypnotic effect that comes from scenes with ET. He is such a creative figure. I heard that Spielberg wanted to make a creature that appeared ugly but would still be endeared to children and adults because of his mannerisms and actions. For many years after the film was released, there were ET shirts and toys selling off the shelves. Watching ET, especially in the final scenes, almost puts me in a trance every time I watch it. He gives the film a dreamy aesthetic that evokes wonder without fear.

I remember the Halloween scene so well because it reminded me of when I would go trick or treating. ET is still being hidden from the mother but the kids pull it off by pretending he’s Gertie dressed up like a ghost in a sheet. He is about her height. To me, this movie is more of a flashback to my childhood than a move plot to be reviewed. I would recommend it to any human as a heartwarming film about childhood. At the same time, know that it is a little sing-song and certainly there is no intense action or definitely no horror. This is a family film with enough of an edge to keep it highly suspenseful and engaging. It has the fingerprint of its household name producer on it for sure. As a classic film of all time, I highly recommend it to you.